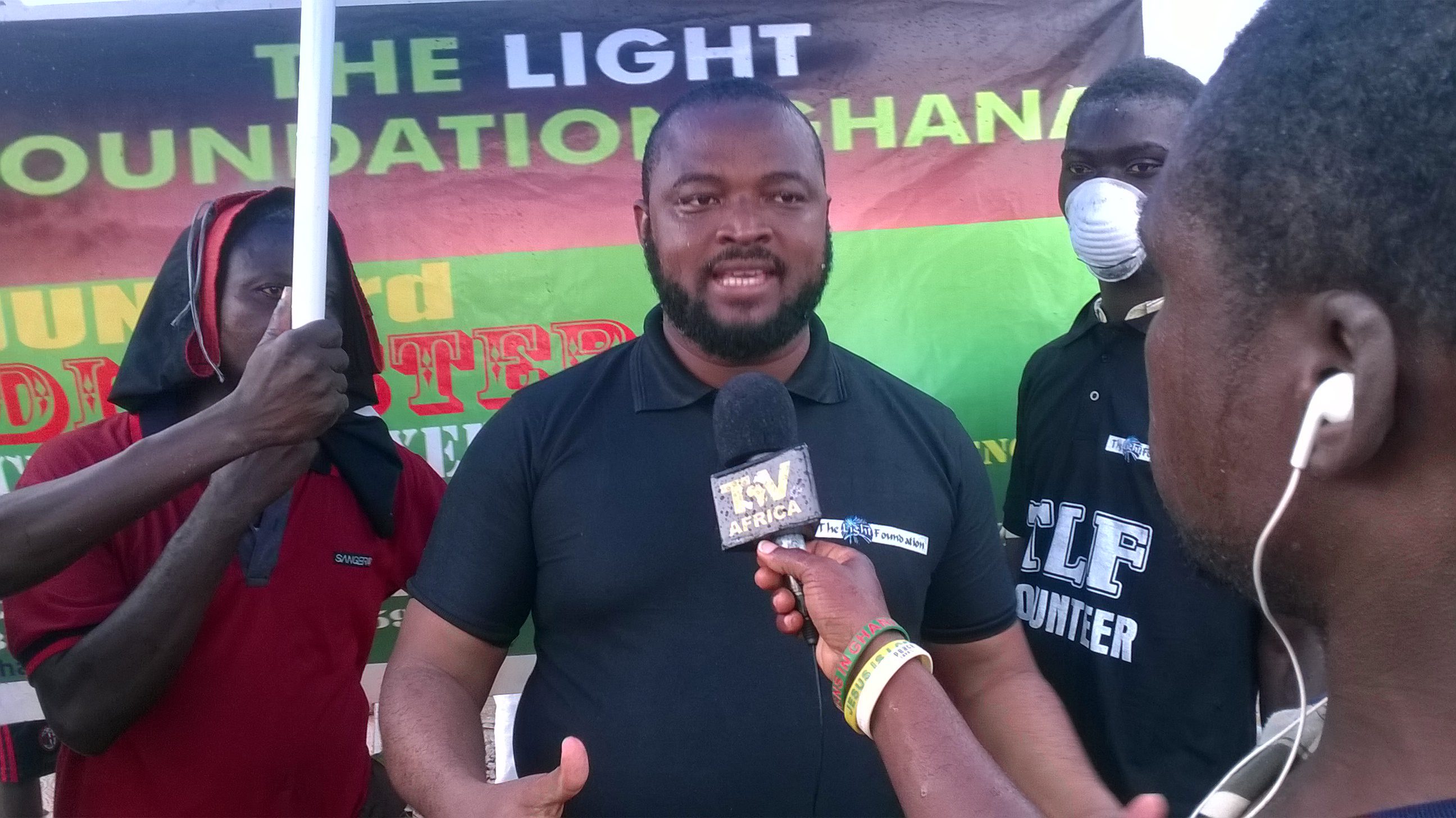 A massive clean-up exercise to get rid of the remnants emanating from the June 3 disaster of flood and fire which claimed 152 lives at the Goil fuel station near the Kwame Nkrumah Circle in Accra, leaving survivors with various degrees of injuries has been held. Although eventually scheduled to take place early in the morning by 6-9am came to a close at 12pm due to a heavy downpour which nearly ruin the well planned event.

About 500 volunteers comprising of The Light Foundation Ghana team and other stakeholders in the sanitation Industry defied the early heavy downpour to clean choked gutters, drains and swept the whole ground neatly and collected the remains of all the debris accumulated by the June 3 flood and fire disaster and disposed them off properly.

Speaking in an interview with Journalists after the close of the exercise, Sheik Ali Napari, Executive President of The Light Foundation, Ghana noted complementing the efforts of Government to rid the country off filth and debris in order to prevent flooding and health hazards that comes poor sanitation, is equally the ultimate responsibility of The Light Foundation Ghana.

He said Government alone cannot handle the management and disposal of the magnitude of wastes the country generates on daily basis therefore it behooves on Non-Governmental Organizations and Individuals to complement Governments effort in getting rid of the debris from the streets and gutters to ensure proper sanitation.

He therefore urged other NGOs including individuals and stakeholders in sanitation industry to collaborate with the Government to ensure that waste products are collected from every nook and cranny within the country and properly managed.

He equally called on all NGOs working in sanitation and health to partner with The Light Foundation Ghana to organize series of clean up exercises on monthly basis to get rid of rubbish on the streets of Accra.

Sheik Ali Napari bemoans the shameful attitude of Ghanaians who indiscriminately litter the grounds, drains, gutters including the streets with plastic wastes and other debris, urging them to put a stop to that bad attitude since that is said to be the main cause of flooding which has resulted into the loss of 152 lives in a recent disaster of flood and fire.

He suggested advocacy as the only way to deal with the problem, pledging his outfit will embark on an advocacy plan to sensitize Ghanaians on proper attitudinal change on how to control waste instead of the indiscriminate disposal of waste into gutters and drains.

According to The project Manager of TLF, Hawa Suleiman Issah, The clean-up exercise will be sustained every month hence forth so as to prevent the gutters from getting choked in order to ward off future disasters and also avert health-related diseases.

She commended the Accra Metropolitan Authority and the Zoomlion Ghana Limited as well as other stakeholders and individuals for their support in making the exercise a success.

Ghana has lost 152 lives in just one day through the twin flood and fire disaster leaving hundreds of survivors with various degrees of injuries.

Majority of those who have been affected by the rain were either displaced or rendered homeless due to the tragedy.

Other survivors have also lost their valuables to the 3 hours heavy downpour on that fateful Wednesday, June 3 2015.