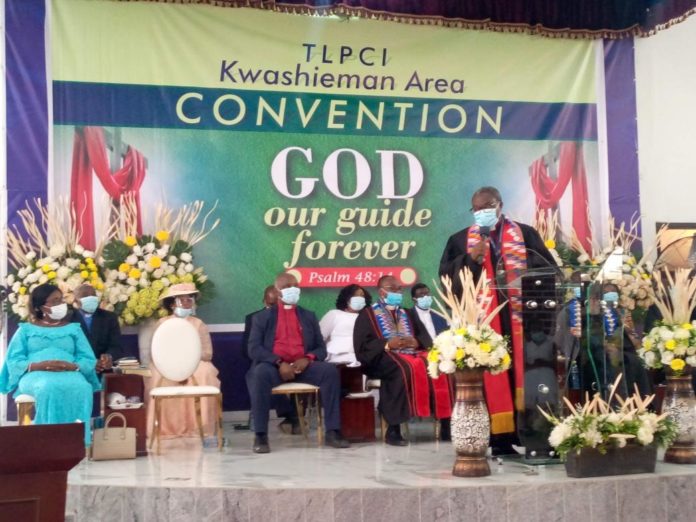 The Lord’s Pentecostal Church International has celebrated its immediate past General Overseer, Apostle Richard Yao Amegbor Buafor, for his immense contribution since assumption of office in 2005 towards the church’s progress and recognition across the globe.

He ensured that the Church launched a website, formed a Minister’s Spouses Association, and established ‘The Lord’s Academy’, the ‘Life Acqua Sachet Water’ Project, and a Credit Union.

Apostle Buafor also ordained the first female pastor of the Church, implemented an educational fund, launched the Church’s hymn book, and initiated a scheme to pay allowances to widows of the Church.

Apostle Eric Essandoh Otoo, the General Overseer, said due to the lead role played by Apostle Buafor and the Immediate Past National Executive Committee, the transition from the outgone to the current Executive Council was seamless with a smooth process.

He said the immediate past administration raised the bar of achievement high, such that it put them on their feet to maintain the mark.

“In the light of the remarkable successes the Apostle Buafor-led Executive Council chalked in their last 15-year tenure, the current Executive Committee and I are pledging to by the grace of God, also bring to bear our very best in superintending another round of successes and achievements for this great Church.

“The Executive Council is poised for action. Our determination to carry this Church to the next level is our utmost driving force. We are however cognizant of the devices of the enemy to derail, frustrate and distract, but we are also reminded that He who has chosen us, has also equipped, strengthened, and blessed us, ready for exploits,” he said.

“We urge Apostle Richard to be rest assured that we shall take the baton to the finishing line, we are reminded with these words in Matthew 16:18 that says “I will build my church and the gates of hell shall not overpower it,” he added.

Reverend Dr. Fred Deegbe, the Former General Secretary of the Christian Council and Senior Pastor of the Calvary Baptist Church speaking on the topic: “Leading that Makes a Difference” as the Guest Speaker, commended Apostle Buafor for his humanitarian support to the needy in the Church and society.

“How people show love to orphans, clothe them and feed the flock of God is one responsibility of a leader,” he added.

He said supporting the needy and vulnerable was one-way leaders could inculcate the word of God in them and bring them closer to God, adding: “Do it willingly, readily, exemplarily and not dominate the flock.”

Rev. Deegbe entreated the congregation to support their leaders and advised the past General Overseer not to relent on his efforts to support the church, saying his end of tenure was not his end of service to humanity.

Apostle Buafor expressed gratitude to all leaders of the church for their individual and collective contributions to support him in building the church.

He urged the General Overseer to be strong and courageous as he had become abreast with the Church’s doctrine, manner of life, purpose of faith, long-suffering, charity, peace, persecutions, and afflictions.

“Let us labour on, spend and be spent for our Master, our Lord, and King Jesus Christ,” he said.
The Church presented citations of honor and appreciation as well as cash and kind rewards to Apostle Buafor and his wife, Mrs Rejoice Buafor.