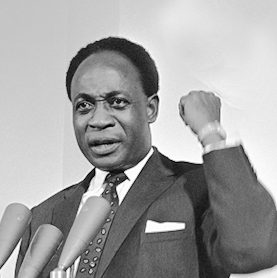 I wanted to make sure that I had left no stones unturned, figuratively speaking, so I went back to read Mr. James Annan’s article titled “Reflections on Ghana’s Republic Day” (Modernghana.com 6/30/17). Predictably, the article was pure pabulum that had absolutely nothing “reflective” or even historically credible, whatsoever, about it. All that the author had tried to do was provide the hopefully untutored reader with a broadly generalized definition of what a “Republic” is, without honestly informing his Ghanaian audience that what happened in our national political culture after 1960 had absolutely nothing to do with how a Republican State or Nation is administered.

You see, under the British-inherited Westminster System of governance, the Prime Minister had to account for his stewardship to the people, by regularly – either weekly or biweekly – appearing before Parliament to answer questions on government policies and practices from the representatives of the people. This was what an increasingly extroverted “Pan-Africanist” Nkrumah hoped to avoid, as he became increasingly megalomaniacal and dictatorial and tyrannical in his governance method and style. His declaration of Ghana as a Republican State or Nation, therefore, had absolutely nothing to do with the salutary desire of then-Prime Minister Kwame Nkrumah to “wean his new nation from Britain’s imperial domination,” as Ghana still remained a bona fide member of the then-British Commonwealth of Nations, composed of countries formerly colonized and ruled by the United Kingdom of Great Britain.

The “Life-President” of the British Commonwealth of Nations has always been the British Monarch, whoever the latter happens to be. This association of former British “Slaves,” in the practical sense of the term, was founded in 1931. I personally have a problem with Ghana’s remaining in the British Commonwealth of Nations, presently simply called The Commonwealth, but this has absolutely nothing, whatsoever, to do with Nkrumah’s declaration of Ghana as a Republic. I simply feel that remaining in The Commonwealth unwisely facilitates the undeserved assuaging of the psychological trauma experienced by many a British imperialist-nationalist in the wake of the logical, necessary and salutary collapse of the erstwhile British Empire. You see, I don’t suppose for a split-second that the British expected to be able to hold nearly two-thirds of the world’s nations and populations in a perpetual state of subjection and second-class citizenship.

The anodyne manner in which Mr. Annan, an Assistant Superintendent of Prisons (ASP), presents his version of the history and meaning of “Republicanism” in Modern Ghana leaves much to be desired, if also because it flagrantly neglects to mention the fact that Dr. Danquah, who had effectively retired from active politics since 1954, decided to run against then-Prime Minister Kwame Nkrumah because the latter protagonist had literally run Dr. Kofi Abrefa Busia, the Parliamentary Opposition Leader of the United Party (UP), out of the country. The future Prime Minister Busia had literally escaped possible assassination, at least certain imprisonment, by the proverbial skin of his teeth. Mr. Annan could have also added the fact that the “Nkrumah Republic” consisted of a one-party faux-socialist state, in which the Executive President of Ghana was also named Life-President, or President-for-Life, by the one-party parliament composed of fanatical operatives and opportunistic freeloaders of the Convention People’s Party (CPP), the Busia-led United Party having been effectively eviscerated from Parliament.

You see, as long as Ghanaians like Mr. Annan persist in fabricating and recycling lie after lie, year-in and year-out, to his audience of young and unsuspecting Ghanaian citizens, the country may never be able to achieve its fullest creative potential. Because no leader and his/her people can build any sustainable and worthwhile society and civilization on a pack of even the most well-crafted lies. Sooner than later, this fabric of lies will begin to unravel. I hope ASP Annan has not been retailing such historiographical bunk to the prison inmates and junior prison officers and wardens that he supervises.