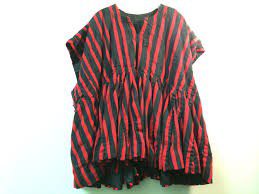 Batakari, also known as Fugu is an attire mostly worn by women and men in the northern part of Ghana.

In Ghana especially in the northern part, people are adapted to the Batakari trend as it is part of their culture. It is also termed as a plaid garment that is similar to what is popularly known as Dashiki or Joromi among some tribes.

Made of hand loomed strips of cotton, it is either sewn or woven depending on the designer and the public?s preference. Batakari as some may choose to call it in the north, and Fugu by the southerners is oftentimes accompanied by a cap.

Batakari is considered a mark of power and tradition as some political leaders have been seen wearing the attire to make public statements. Kwame Nkrumah declared the independence of Ghana on March 6, 1957 wearing the Batakari. During the Damba Festival which is celebrated by the people of Dagbon, Gonja, Mamprusi, Nanumba and Wala of Northern Ghana, the dress code is the Fugu. The smock is also worn during marriage and burial ceremonies.

It is a fact that in Ghana, most politicians wear Fugu sewn in their party colours to rallies and conventions.

Former Presidents Jerry Rawlings and John Evans Atta Mills wore it extensively as their ceremonial gowns, making the Fugu acknowledged as a national attire. President Mahama also wears it on many occasions. The Fugu also has great historical and linguistic significance. For example, when the cap is worn upright, it means no one has a higher status than the one wearing it. When it is turned to the left, it means the wearer is from a royal family.

When the cap is turned backwards it means the wearer has followers. Finally, when it is pointed forward, it indicates that no one is behind the wearer and this is usually worn by warriors.

Traditionally, the Fugu is also worn as a war attire, so it is understood that the protective amulets adorning it creates a solemn and mystical effect during war.

As intriguing as it may seem, the wearing of smock has finally caught up with the country. This makes every individual deem it necessary to have one in their wardrobe.

Check out some beautifully woven Batakari below