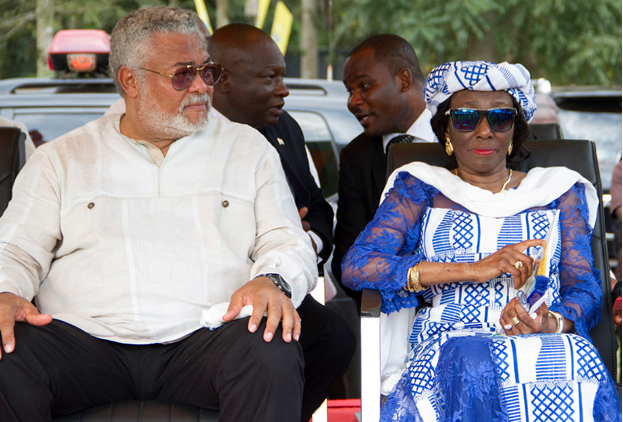 Even though the medical-trained-daughter of the former first couple, Dr Zanetor is contesting the Klottey Korle parliamentary seat on the ticket of the ruling NDC, Mr. Rawlings and his better half have so far demonstrated both in words and deeds they will prefer an Akufo-Addo presidency after the November polls.

While former President John Kufuor has openly endorsed Nana Akufo-Addo despite the strain in their relationship, with many political watchers expecting the NDC founder to do same for Mr Mahama, the opposite is rather the case.

Mr Rawlings and wife, who broke away from the NDC to form NDP following Konadu’s humiliationin the flag bearer contest at the NDC’s Sunyani congress in 2011, have instead; teamed up with Nana Akufo-Addo to topple President Mahama since 2012.

Aside dispatching her supporters to openly pledge support for the twice defeated presidential candidate ahead of the 2016 elections, Nana Konadu, Leader of the National Democratic Party has not spared the Mahama led NDC administration her uncalled-for vile attacks and unsubstantiated corruption allegations.

Mr. Rawlings, on his part, has openly and consistently been predicting President Mahama to lose this year’s election to Nana Akufo-Addo whom, he has persistently commended for his bold leadership credentials and his party’s (NPP) efforts at exposing corruption in the NDC government.

‘‘When I look at him (Mills) and look at this John Mahama, they have too many commonalities except that this John has not lined up people on the promise of a job to insult and fabricate things against me and my wife and family as Mills did. This John has not done that but that is not to say that John Mahama is not also going astray. This President Mahama claims he is fighting corruption but I can’t really see that,” Mr. Rawlings stated in a recent interview on GHONE TV.

While many believe these comments are tacit endorsement of the NPP’s 2016 flag bearer, Mr Rawlings just yesterday revealed that he is not a fun of.

Reacting to alleged ethnocentric comments by former Transport Minister, Dzifa Ativor, Mr Rawlings said “I do not subscribe to the politics of ethnic bias and never have. While I may not be a fan of the NPP, I know their presidential candidate is not tribalistic or ethnocentric. Whatever Nana Addo’s shortcomings, tribalism is not one of them. Some known and respected Voltarians like Nutifafa Kuenyehia should be able to testify to his political nature.”
Rawlings and Konadu have in recent times gained notoriety for passing disparaging comments about the Mahama-led NDC government with the sole purpose of slimming its chances of securing a second term mandate.

Relentlessly, Mr. and Mrs Rawlings have been desperately scheming to push President Mahama and the NDC into a defensive position to the benefit of Nana Akufo-Addo and the NPP who have been struggling to kick start their campaign ahead of the November 7 elections.

The NDP leader has of late been obsessed with NPP’s call for change and at the least opportunity rundown the Mahama government, claiming there is nothing to show for President Mahama’s claim of transforming Ghana and changing lives.

But The aL-haJJ has gathered that the motive of the NDC founder and his wife is to warm their way into the hearts of Nana Akufo-Addo in order to tie the hands of the latter not to come after them in the event he succeeds at his third and possibly, last attempt at the presidency.

The Rawlingses are said to be convinced no NDC government would ever hold them to account for their stewardship, therefore; it is in their best interest to “assist” Akufo- Addo in his Presidential bid to avert a repeat of how an NPP regime under Kufuor stripped them of their privileges and nearly had Nana Konadu jailed over corruption charges.

Having also lost their “rightful place” in the party they founded due to their nagging character and thoughtless attacks on the NDC ahead of the 2012 elections, Mr. Rawlings and Nana Konadu have vowed to “partner” Nana Akufo-Addo to ensure the ruling NDC loses the November 2016 elections in order to pave way for them to “take back their party”.

Despite these harsh criticisms and ill-treatments, President Mahama has continued to maintain a healthy relationship with the former first family even, if they don’t reciprocate it.

On the other hand, interactions between the Rawlingses and Akufo-Addo at social functions are one of heartiness, joyous and pleasantries compared to their interactions with President Mahama.

This, according to political watchers, indicates that Mr. and Mrs. Rawlings relate better with Nana Akufo-Addo and will do anything to assist him to dislodge President Mahama.