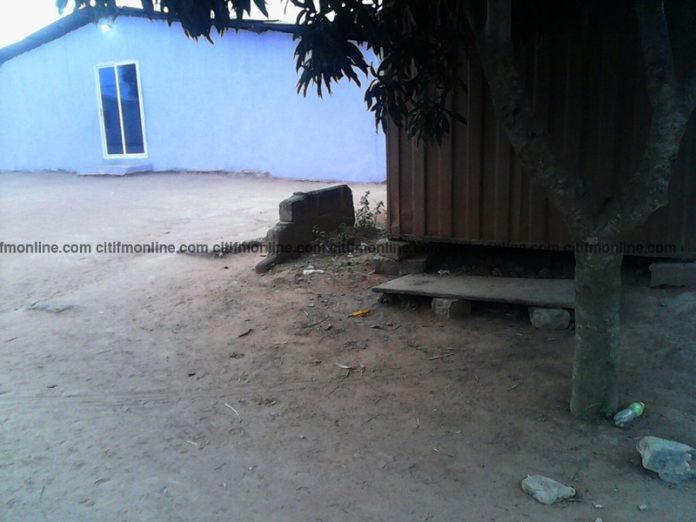 The seeming lifeless body of a man laid next to a Church at Ablekuma Agape, Accra, for several weeks. According to residents, they had observed that the man, unknown to them, often walked about the neighbourhood looking very sick.

“When I reported to the Anyaa Police, they asked me if the man was a relative of theirs for me to report the matter to them. The officer in charge told me that all they can do about it is to deposit his dead body in the mortuary should he eventually die,” Victoria, one of the residents narrated.

Later, the man was struck by a stroke and fell into a gutter at Ablekuma Agape. The residents picked him up and left him on a wooden board under a mango tree close to the Light of God Church. 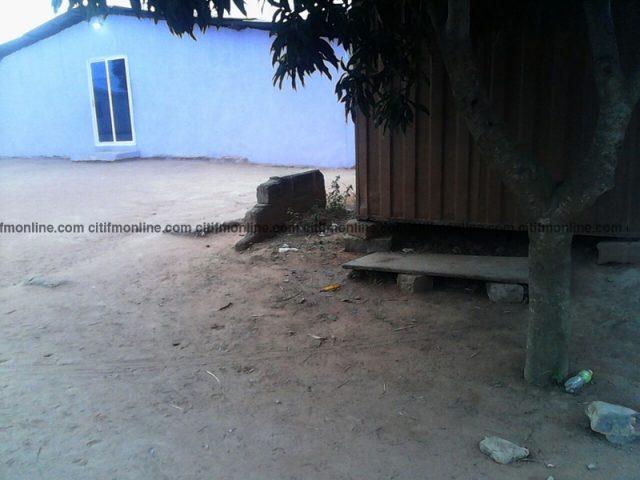 The Mango tree under which he often stayed.

There, Victoria, the ‘good Samaritan resident’, occasionally bathed him together with another resident, Mary. They fed him when they could afford.

But a Pastor of the Light of God Ministry, Pastor Robert Aboagye, strangely condemned the “man as mentally unstable person sent by the devil to destroy the Church, claiming that, anytime the man defecated on himself, “it affected attendance at Church because he lies along the entrance to the Church.”

Mary, one of the women who cared for him observed that “anytime the man crawled to the Church for help, they dragged him out.” He will then crawl to the side of the road in search of food, eating whatever he came by from the ground.

Moved by compassion, Maxwell with his wife Cynthia; would send food daily to feed the man. According to Victoria, she discovered to her horror “maggots in his festering wounds” when she took off his trousers to bathe him.

His condition worsened almost to the point of death after a heavy rain on one of the days. The residents called on Maxwell who rushed him off to the Ga South Hospital.

Over there; the nurses insisted Maxwell washed the man before they gave him any attention – a job that ordinarily and professionally, the nurses were supposed to carry out by themselves.

This is because the man had defecated on himself and was very dirty and smelly.

Around 11:00pm that day, Maxwell reported to the Anyaa Police Station where according to him, the police, while speaking on a mobile phone, dismissively said the case was a DOVVSU case hence there is nothing that can be done about it.

When he reported to the Odorkor DOVVSU, they turned him away with the argument that “the man was above 55 years therefore does not fall under their remit.  In his frustration, Maxwell lamented “life as a Ghanaian almost meant nothing to the state.”

From the Ga South Hospital where Maxwell paid the bills, he was referred to the Ridge Hospital. The man could not say a word even as he tried.

The Head of Internal Medicine, Dr. Henrietta Fiscian, told Citi News, even though he was responding to treatment, his condition remained critical.

“He’s had a stroke so what we need to do now is to be able to do a CC scan on his head and some additional laps for me. The first time he didn’t have any form of physiotherapy so it’s unlikely that he will regain full power on that side; and we think that he has a recurrent stroke which means that the risk of dying from the next one is very high.”

The hospital declared him a pauper patient which means Social Welfare will foot the rest of his bills, giving some relief for Maxwell’s pocket.But his headache will be how to reconnect the man back to his family should he eventually recover.

“The most important thing now is reconnect him to his family. It becomes more difficult because he cannot speak at all” Maxwell remarked.

At Ablekuma Agape, Mary, told Citi News that before the man went completely dumb, he mentioned the name Steven Hornu to her. She was however doubtful if that was his name.

After airing the report of the sad story on Citi FM, word got to the family about their relative who had gone missing for nearly a year. The next day, a family drenched in tears, stood round the bed of the man who became known as Abel Hornu.

His wife, who herself, is a mild stroke patient in a wheel chair; said even though she was “happy to finally see her lost husband, she was devastated by the condition in which she found him.”

Mr. Honu’s wife seated in a wheelchair by his bedside at the Hospital.

She was however grateful to God that her husband is still alive.

The oldest of Mr. Hornu’s children, Irene, said her cousin sent her a picture of her father, and after identifying a dark spot beneath the left eye of the picture; she was convinced that was her father. She recounted while sobbing, how her father’s loss has affected her life.

“It has affected my life in many ways. Sometimes we have to wake up very early to go and look for him” the 31-year old daughter sobbed.

While she is studying childhood development at NATTC, one of her two other siblings is jobless after completing Senior High School and the last of the three is in his final year in Mawuli SHS.

“Life has been very difficult for us. But thank God, my aunt has been helping with the paying of my fees. My mum is also sick but because of God, some people have been paying her hospital bills” a tearful Irene recounted.

According to the wife, Victoria Brebe, her husband left home at Ashaiman-Klagon; saying he was visiting the toilet last year on March 7, 2016, and since then they have never seen him.

“We heard he was at Kaneshie overhead; we went to search the whole place, made announcements on several media houses but it all proved fruitless.”

Even though they are all happy to meet their father again, they are not in a hurry to take him home for financial reasons; and also considering the state of his health.

Judith Atsu, the sister-in-law of Abel Hornu, who has been taking care of the wife and children of Able Hornu; and 10 other orphans from another brother, says the financial stress will be too much for her to bear.

“As I’m saying, the whole family is on me. I’m looking after them and this one too (referring to Irene) I’m looking after her, she also has a child, and the burden on me will be very huge.” she cried out.
–
By Caleb Kudah/citifmonline.com/Ghana