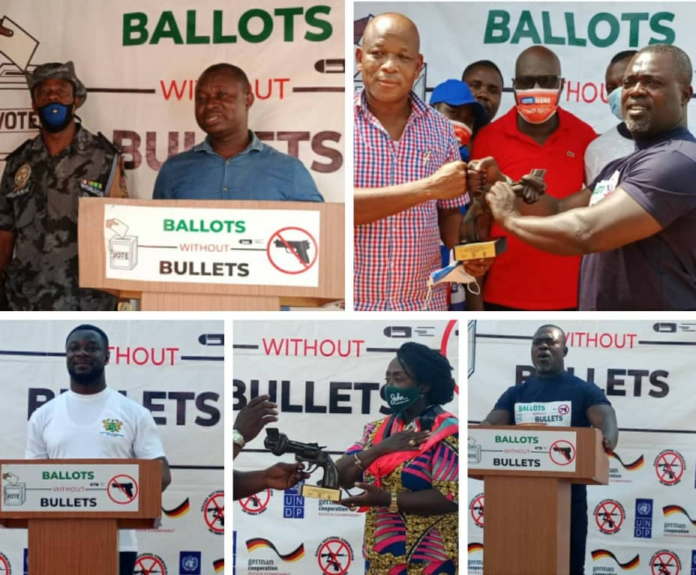 Superintendent of Police, Mr Bempah Sarpong, Aflao Police Commander has urged Ketu South residents to go out to cast their ballot on election day without fear of intimidation from security agents.

Chiefs and people of the border Constituency had in recent times, lamented the heavy security presence in the area alleging, the deployment was the government’s attempt to intimidate people from coming out to vote in the upcoming elections.

But Supt Sarpong speaking during the “Ballots Without Bullets” campaign in the Municipality said people should not entertain fears and gave the assurance that the Police and other sister security agencies were not deployed to intimidate or prevent the citizens from exercising their franchise but “are here to protect them.”

“We have made arrangements to prevent violence before, during and after the elections. We met with stakeholders and talked to them about dos and don’ts and assured them there won’t be any intimidation from the security.

We’ve resolved to be professional to ensure a peaceful elections.

Just as we’re committed to peace in the electioneering period, we’re warning pintending toion to foment trouble on the day not to try because we won’t countenance violent activities. We have enough men to ensure security and protection on the day.”

The “Ballots without Bullets” campaign is an initiative by the Ghana National Commission on Small Arms and Light Weapons in collaboration with the United Nations Development Programme and with funding from the German Foreign Office to intensify public education and sensitisation activities to influence citizens to uphold peace ahead of the country’s eighth elections since 1992, on December 07.

Mr Jones Applerh, the Executive Secretary of the Commission explained their visits to Ho Central and Ketu South in the region were informed by statistics from the Ghana Police Service identifying such places as hotspots susceptible to violence and security breaches, thus, the need to get Parliamentary Candidates (PCs) to publicly commit to peace for their supporters to follow.

The Executive Secretary of the Commission, committed to peace, safety and public security through the control of proliferation of small arms, appealed to the PCs to impress upon their supporters not to resort to the use of guns to address their grievances.

She called on the government to ensure security agents in the area acted professionally while charging the constituents to avoid violence saying, “all that’s needed is to go out with your cards and thumbs, but no gun, no violence.”

Mr David Tiahno Quarshie, New Patriotic Party (NPP) PC said as an elder in the Church of Pentecost, he was committed to keeping the peace in the Constituency and called on constituents to also do the same noting, he would not condone acts of violence.

Mr Kofi Sakyi Boampong, Municipal Electoral Commission Director said his outfit was fully ready and committed to presiding over “a free, fair and transparent elections” on December 07 and called for collaboration from stakeholders for a smooth process.