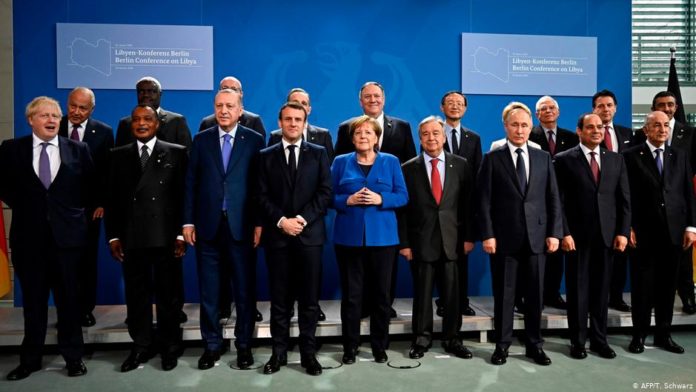 Note: This address was prepared and delivered at a Communist Workers League (CWL) class on United States Imperialism and the War against Iran which was held on Saturday January 25, 2020 in Detroit. The event featured Randi Nord, the editor of Geo-politics Alert website which covers events related to international affairs with a special focus on West Asia, Latin America, U.S. foreign policy and developments in Europe. Also addressing the class was Yusuf Mshahwar, an observer of West Asian affairs and a student at Wayne State University. Abayomi Azikiwe, PANW Editor and writer for various publications, discussed the relationship between imperialist interventions in North Africa and related occurrences in West Asia and other geo-political regions within the international community.
————————————————————————————————————-

As we enter the third decade of the present century, it is important for anti-imperialists to take stock of events over the previous ten years.

Since 2010, the role of United States imperialist militarism has been just as disruptive, destabilizing and deadly as in previous eras.

Of course there was some initial hope when uprisings erupted in Tunisia and Egypt during late 2010 and early 2011. Nonetheless, neither of these popular rebellions against the neo-colonial dominated regimes in Tunis and Cairo developed into a revolutionary transformation of society.

In Tunisia and Egypt, it was only the military and security apparatuses which proved capable of seizing state power and ushering in a transitional process. Tunisia seems to have been the most pliable in regard to stabilizing a bourgeois democratic system. However, Egypt after the election of the Freedom and Justice Party (FJP), which was dominated by the Muslim Brotherhood, was the scene of continued unrest and the eventual well-planned takeover in July 2013 by the military.

Former Field Marshall Abdel-Fattah el-Sisi, soon stepped down from the military and won two successive terms as president. At present, Egypt is the Chairman of the continental 55-member African Union (AU).

The situation in neighboring Libya clearly exposed the dangers of fomenting unrest absent of a revolutionary character. In fact developments in Libya since February 2011 represent a counter-revolution against not only the people of that oil-rich North African state nonetheless also influencing the impact of the constantly deteriorating situation on other regional nations and the international community in general.

At present a conference in Germany on January 19 discussed the future of what was Africa’s most prosperous country under the Jamahiriya led by Col. Muammar Gaddafi. Turkey has sent troops into Libya in an effort to bolster the Government of National Accord (GNA) headed by Prime Minister Fayez al-Sarraj which was imposed by the United Nations Security Council four years ago amid internecine conflict and dislocation.

The only announcement to emerge from the Berlin Summit was a vague commitment to honor an arms embargo on Libya. Yet, the initial arms embargo was imposed by the UN Security Council through two resolutions (1970 and 1973) passed during March 2011. Those resolutions were utilized by the imperialists to provide politico-legal cover for the massive bombings and ground operations carried out by the Pentagon and NATO along with its allies in the region which destroyed the country.

Neither the GNU nor the Libya National Army (LNA) of renegade General and longtime Central Intelligence Agency (CIA) operative, Khalifa Hafter, embodies the capacity to rally the people of Libya around a program of unification and national development. Libya, under Gaddafi, had played a leading role in the campaigns to reform the AU and to build structures of continental integration on the military, economic, cultural and political levels.

Today just the opposite reality in Libya and North Africa is in existence. The Pan-African foreign policy of the Jamahiriya has been replaced with a defensive posture of attempting to ensure the recognition of the GNU. Nevertheless, the imperialists had placed their estimations with the ability of the LNA to tear down the defenses of the militias providing security to the UN-recognized administration in Tripoli. Since April of 2019 this has not been the case. The GNU and its supporters have maintained control of the capital and with the Turkish political and military intervention the city will become even more fortified.

Oil has become a weapon unsurprisingly for those in the East backing Hafter and the often unheard Southern communities. Libya has the largest known petroleum reserves in Africa therefore its economic and political trajectory is of profound interests to the Western capitalist countries. The rise in oil prices over the last few weeks in response to the targeted assassinations of Islamic Republic of Iran Lt. Gen. Qassem Suleimani and Iraq Popular Mobilization Units (PMUs) Deputy Commander Abu Mahdi Muhandis by the Pentagon, illustrates clearly the significant role of oil production inside the country.

An article published by Middle East Eye on January 25 says of the oil situation in Libya that:
“Libya’s oil production has plunged by about three-quarters since forces loyal to eastern military leader Khalifa Haftar began a blockade a week ago, the National Oil Corporation said on Saturday (Jan. 25). The decline, from 1.2 million barrels per day to just over 320,000, has caused losses of about $256m since the closure of major oil fields and ports in the east and south of the country, the NOC said in a statement cited by AFP. Haftar, who controls the east and large swathes of the south, began an offensive in April last year to seize the capital Tripoli from the UN-recognized Government of National Accord. Pro-Haftar forces blockaded the main oil terminals in eastern Libya the day before a summit in Berlin on 19 January that called for the end of foreign interference in the conflict and a resumption of the peace process. The move to cripple the country’s main income source was a protest against Turkey’s decision to send troops to shore up Haftar’s rivals.” (https://www.middleeasteye.net/news/libyan-state-oil-company-says-output-down-75-percent-amid-haftar-blockade)

According to Oilprice.com, the U.S. responded immediately to the oil flow blockages by emphasizing: “The U.S. Embassy in Libya said on Tuesday (Jan. 21) that the country’s National Oil Corporation (NOC) should be allowed to immediately resume oil operations that were suspended over the weekend after groups loyal to General Khalifa Haftar blocked virtually all oil production and exports from the African oil producer…. On Sunday, 800,000 bpd—more than half of Libya’s oil production of around 1.4 million bpd—was taken offline after forces loyal to Haftar blocked the oil ports in eastern Libya which are under the control of Haftar’s Libyan National Army (LNA). The move came ahead of an international conference in Berlin between Haftar and the Government of National Accord (GNA), which is backed by the UN.”

The question of energy resources is paramount within imperialism. The western capitalist states want to maintain control over the flow and prices of petroleum and other important energy commodities.

All of these developments in North Africa and the role of Turkey and other NATO countries, portend much for U.S.-Iran relations. The focus on Iran is about oil as well as strategic positioning in regard to international trade. The Straits of Hormuz are significant in the shipping of strategic resources including military dynamics.

Iran and its growing alliance with Syria, Russia, China, among other states, is important in analyzing the current hostility emanating from Washington. Trump is using the Iranian situation to bolster his status among the Republican base and to deflect attention away from current impeachment proceedings in Congress.

Iran and the Revolutionary Struggle in West Asia

It has been 41 years since the triumph of the Iranian Revolution of 1979. The previous monarchy of the Shah was installed and supported wholeheartedly by the U.S. and other imperialists governments from 1953-1979.

Since 1979, Iran has made tremendous strides in providing educational, social and political rights to the majority of the population. Iran has also been active in the field of international relations seeking out relationships with countries throughout Asia, Africa, Latin America, Europe and North America.

The Joint Comprehensive Plan of Action (JCPOA) represented a milestone in a negotiated process designed to normalize diplomacy and to lift the draconian sanctions against the Iranian people. Besides the U.S., France, Britain, Germany, Russia and China were party to the landmark agreement signed on July 14, 2015. However, the administration of U.S. President Donald Trump literally tore up the JCPOA and imposed further sanctions.

Then during early January, a targeted assassination of two prominent leaders of Iran and neighboring Iraq prompted the outrage of progressive forces internationally. Demonstrations were held in capitals throughout the world where the actions of the Trump administration were routinely denounced.

Since the martyrdom of Suleimani and Muhandis, the Iranian Revolutionary Guard Corps (IRGC) has shelled a U.S. military base in Iraq. During the same period, a Ukrainian airline was brought down inadvertently by the IRGC killing over 100 people. Now this incident is the subject of an internal and international investigation.

Many are encouraged that full-scale military conflict between Washington and Tehran has not erupted. However, these two incidents, the martyrdom of Suleimani and Muhandis and the subsequent retaliatory measures by Iran, represents only the beginning of an ongoing military engagement which could result in the deployment of far more troops by Washington to the Persian Gulf.

The Role of Anti-Imperialism in North America

Those inside the U.S. and Canada who oppose further imperialist engagement in West Asia must remain committed in the struggle to end Pentagon intervention in Iraq, Syria, Yemen, Palestine, along with other states within the region. Our activities must be consistently aimed at building solidarity with the Iranian Revolution and other progressive movements throughout the region.

Even though now the focus in the U.S. appears to be centered on the Senate impeachment trial, the State Department, Central Intelligence Agency (CIA) and the Pentagon, are moving ahead in carrying out its aggressive policy towards Tehran and other states. The presidential and Congressional elections of 2020 should be utilized as a forum to raise these important issues before the workers, youth and nationally oppressed. We utilized this approach in July and August during the Democratic Party debates held at the Fox Theater in downtown.

We were there with banners, placards, broadsheets and cadres in order to point out that racism, national oppression, capitalism and imperialism are not just the prerogatives of the Republican Party. The working class in actuality needs its own party which can speak in the fundamental interests of the masses of workers, youth, farmers and oppressed nations.

Literature can be developed which clearly articulates the history and contemporary political exigencies involving Iran and U.S. foreign policy in the Persian Gulf, West Asia and North Africa so that people will not be goaded into lending political support to another failed military intervention in West Asia. Through our antiwar actions we can emphasize our maximum solidarity with the people of Iran and the entire region of West Asia.

It is essential that whichever candidate for the Democratic Party is selected to face off in the November elections, we should make it clear that a violation of the independence and sovereignty of the Islamic Republic of Iran will evoke the raft of the peace movement in North America. Such a principled position will guarantee that our organizing work links the struggles of the U.S., West Asia and the international community as a whole.