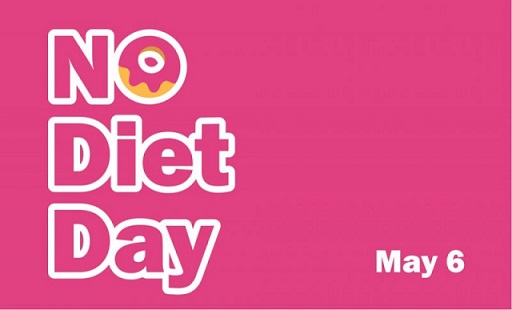 The world marks “No Diet Day” every year on May 6 to enable people to accept their bodies and to promote a healthy lifestyle and raise awareness on the dangers of dieting.

The celebration of the Day has helped in handling problems concerning diet and also created body awareness with its symbol being a blue ribbon.

“No Diet Day” was introduced by Mary Evans, Director of the British group “Diet Breakers” in 1992 after she had anorexia nervosa, an eating disorder, which caused less food intake with the fear of gaining weight.

She helped people to appreciate themselves and their bodies by beginning her “Diet Breakers Movement,” which helped many individuals formed a healthier relationship with food and their bodies.

In 1992, she had already battled the illness, bullying, and body image issues for years, and had enough and originally intended the Day to be celebrated only in the United Kingdom (UK) but she was inspired to see it spread internationally.

Only a few dozen women in the UK celebrated the holiday, with “Ditch That Diet” stickers and a picnic. By 1993, women in various countries wanted to celebrate and the date was changed to May 6 to avoid conflict with Cinco de Mayo festivities.

According to research, Dieticians and dieting sprung up as early as the 18th century when obese English doctor George Cheyne underwent a tremendous weight loss by eating only vegetables and drinking only milk.

He recommended his diet to all who suffered from obesity, and wrote an essay titled “An Essay of Health and Long Life.” This essay suggested fresh air and avoidance of “luxury foods.”

Research shows that William Banting, an English undertaker, created the first fad weight-loss diet “Banting” in 1863, and people continued to use specific eating habits to become healthier or make their bodies fit a certain societal ideal.

It was still being printed as of 2007 and is considered a model for popular diets which involved four meals of meat, greens, fruit, and dry wine per day.

It promoted calorie-counting, which remains popular today and over 1000 weight-loss diets have developed, but most focus on consuming a low amount of either calories, fat, carbohydrates, or sugars.

Research reveals that diet culture boomed due to the increasing amount of accessible media, from television to adverts to the internet, with marketers promoting body standards and ideals that were difficult for many people to attain.

In many cases, photo editing and plastic surgery made these figures physically impossible to naturally attain, yet many felt the social pressure and turned to diets to thin themselves.

Studies show that myths which include eating very-low-calorie diets, or crash diets are false because they consist of less than 800 calories consumed per day, unmonitored, these can afford insufficient nutrients and even lead to cardiac arrest.

Contrary to what some diets preach, eggs don’t confer unhealthy cholesterol. They are safe and healthy to eat as they don’t typically raise the level of cholesterol in the body, studies have shown that they do affect the heart and are very nutritious.

Breakfast is good for you because studies show that breakfast skippers are more likely to be overweight than those who don’t skip the first meal. It’s also a myth that breakfast boosts metabolism.

Many desperate dieters turn to supplements to lose weight but are usually disappointed and may be throwing their money down the drain because very few actually work, which can be frustrating and expensive.

All we need as individuals is to be confident and love our body types and stop body shaping, however, if you need to exercise, do it diligently to achieve a healthier body.