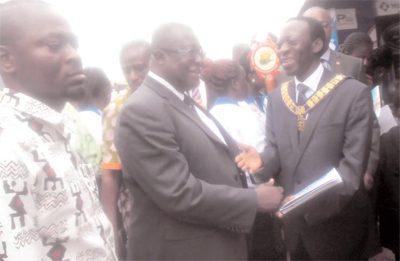 Six top pharmacists interdicted under suspicious circumstances at the Food and Drugs Authority (FDA) and the Pharmacy Department of the Korle-Bu Teaching Hospital (KBTH) will soon be reinstated.

This assurance was given by the Chief Director of the Ministry of Health (MOH), Salimata Abdul Salam, at the opening of the annual general meeting of the Pharmaceutical Society of Ghana (PSGH) held in Koforidua.

The assurance followed a request made by the President of PSGH, James Ohemeng-Kyei, for the pharmacists to be recalled to work since ?there have been no criminal charges against them.?

He said if the interdicted pharmacists are, however, found to have indulged themselves in fraudulent deal as had been alleged, they would be charged and put before the law court for justice to prevail.

It would be recalled that the Deputy Chief Executive of the FDA (Drugs Division) and the Head of Laboratory Services (names withheld) were interdicted in 2009 for alleged fraud ?under very controversial circumstances without recourse to public service procedure.?

Madam Abdul Salam further assured that the governing board of the reconstituted Pharmacy Council would soon be named.

Mr Ohemeng-Kyei called on the government to insulate professional and technical staff of the FDA and Pharmacy Council from partisan politics.

Speaking under the theme: ?Responsible Use of Medicines: The Impact of Regulation?, he said ensuring the responsible use of medicines was critical to improving patient?s safety, reducing levels of resistant strains of harmful micro-organisms and the rising cost of healthcare as well as promoting sustainability of the Health Insurance Scheme.

He noted that it is the desire of the PSGH to ensure that the people of Ghana have access to quality, safe, efficacious and affordable medicines.

Mr Ohemeng-Kyei, therefore, appealed to the FDA not to allow any pharmaceutical manufacturer, importer, wholesaler or distributor to import, distribute or market any medicine in the country without being registered by the authority.

He also appealed to Parliament to enact a Legislative Instrument (LI) to clearly specify the extent of the powers of the FDA under the Public Health Act, which established the FDA, adding,

?This will prevent the arbitrary abuse of the power vested in the authority.?

He encouraged the pharmacists to engage in public education on the control and prevention of cholera and Ebola viral disease (EVD).

The Eastern Regional Minister, Antwi Boasiako Sekyere, was lauded for the role he played in fixing the premium rate of medicines for the National Health Insurance, which was rather too low and made producers run at a loss.

The 1984 year group of the Faculty of Pharmacy, Kwame Nkrumah University of Science and Technology (KNUST), as part of their 30th anniversary celebration, used the occasion to donate laboratory instruments, including test tubes worth GH?33,000.00 to the school.

Pharmacists urged to ensure safe and effective medicines for all

PSGH calls on government to leverage on expertise of pharmacists

The Loss Of Prof. Plange-Rhule: An Exposure Of A Non-unified Health Care System In Ghana?