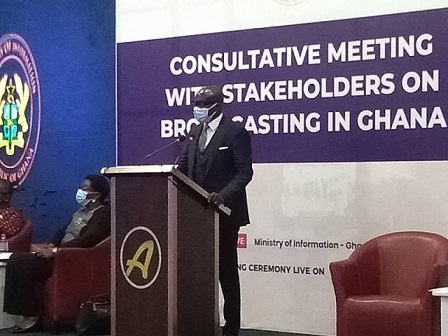 The Attorney-General and Minister of Justice, Mr Godfred Yeboah Dame, says the efforts to regulate the media is cast in law and falls within international best practices, saying” regulating the media is not unconstitutional”.

He said the 1992 Constitution architecture anticipated the need to regulate the media landscape, to protect the reputation and rights of the citizens, as well as uphold public morality and order.

He noted that after the Constitution granted freedom of expression and information to the media in Articles 162 and 163, it also imposed reasonable limitations on the media to protect the rights of others.

Mr Yeboah Dame made these remarks at a consultative meeting convened by the Ministry of information in Accra, on Friday, to deliberate on broadcasting in Ghana.

This follows the recent happenings in the media landscape, with some media outlets allowing the broadcasting of inappropriate content such as money doubling, a ritual for money, pornographic materials, fake news and hate speech.
The meeting brought together key media stakeholders to deliberate on measures necessary to regulate the media contents and apply appropriate sanctions to offenders.

The meeting will also discuss the Draft Broadcasting Bill and make inputs towards its promulgation.

Information Minister Kojo Oppong Nkrumah, in his welcome remarks, said Ghana had made considerable progress in enhancing media freedom and expression and had become a shining example in Africa.

However, he said, there had been rising threats to media freedom due to the broadcasting of inappropriate content by some media outlets, therefore it was imperative to regulate the media space to prevent further harm to the public.

He mentioned illicit contents like broadcasting of pornographic materials, promotion of money rituals, money doubling, advertising of unapproved drugs, among other criminal activities.

Therefore, he said, the stakeholders must find a common ground to deal decisively with inappropriate media contents and apply sanctions to offenders.

Mr Oppong Nkrumah said when Parliament resumed from recess, the Broadcasting Bill would be a subject of discussion and the outcome of the stakeholders’ deliberations will feed into the discussion for passage into law.

The Minister urged the participants to voice their concerns dispassionately to get a legal framework to protect public morality and public health.

Justice Sophia Banasco Bessah, a Justice of the Court of Appeal, who chaired the programme and deputised for Chief Justice, said there had been various attempts at enacting broadcasting legislation.

She mentioned current legislation that gave powers to the media like the 1992 Constitution, National Media Commission Act of 1993, National Communication Act of 1998, and Legislative Instrument 2003.

However, she said, it was imperative to harmonise the relationship between constitutional provisional guarantees and actual regulatory practice.

Ho MCE commits to creating access roads in the Municipality

Hockey AFCON: Coach Frimpong is sure of a win for Ghana against Egypt