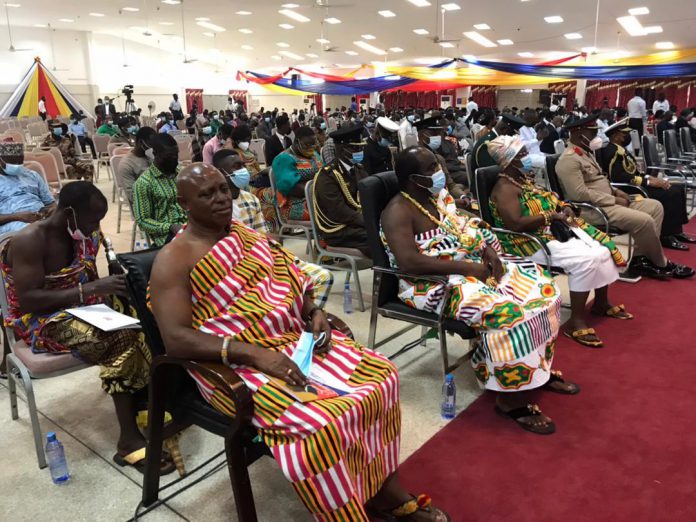 President Nana Addo Dankwa Akufo-Addo has asked Ghanaians to disregard information circulating that the country was experiencing the culture of silence.

He said as a human right advocate, protecting the fundamental human rights of people especially press freedom was his priority and he would not do anything that would dent the country’s image. The President made the clarification at a special congregation held by the University of Cape Coast (UCC) to confer an honorary doctorate Philosophy in Educational Leadership on him.

“For me, I find it ironic that the Presidency of a man who has been and continues to be the most verified political figure of his generation would be accused of presiding over a culture of silence, there is no midnight knock on the door in Ghana for authors of dissenting views, not will there be during my Presidency” he added.

“I appreciate well-argued opinions that challenge the status-quo. I need no lessons on the importance of a vigorous media in building a healthy democracy. I dare say that the atmosphere in our country is one of spirited conversation and debate among politicians, the business community, civil society organizations and ordinary citizens” he indicated

President Akufo-Addo said “an opinion or statement of one journalist must not institute a tag for all journalists in the country” that the government has no interest in covering up anyone involved in whatever crime committed in the country.

“It is my deepest regret that perpetrators of Ahmed Suale have not been convicted but the government will not relent on the issue, the culprit would be found and punished” he added.

He assured the public that the government was focused and would ensure the freedom and justice fought for by the forefathers was protected to help achieve the national development goal.

The President also commissioned a newly built Central Administration block of the UCC, which was started on May 16, 2005 during the tenure of Revered Professor Emmanuel Adow Obeng, to support efficient and effective teaching and learning.