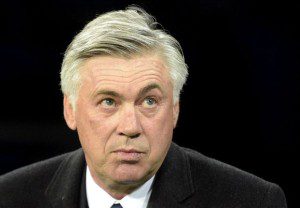 insists he is getting no pleasure from Barcelona?s current problems and backed Luis Enrique to get the Catalans back on track.

Luis Enrique has come under fire for his decision to grant Lionel Messi and Neymar an extended winter break only to leave them on the bench for Sunday?s 1-0 defeat at Real Sociedad.

Messi then missed training on Monday with suspected gastroenteritis ? a development which gave further fuel to those who claim the Argentina superstar is currently unhappy with life at .

If that was not disruptive enough for Barca, director of football Andoni Zubizarreta was sacked yesterday following criticism of president Josep Maria Bartomeu and was followed out of the door by his number two Carles Puyol.

Ancelotti could be forgiven for viewing events in Catalonia with glee but the Italian played a straight bat when asked about it on Tuesday.

Speaking ahead of Wednesday?s Copa del Rey clash with city rivals Atletico, he told reporters: ?I?m not happy about Barcelona?s problems, because I have things to fix of my own. I look at my own team, not what happens in Barcelona. Let?s just say that teams have problems during the season.?

He believes Luis Enrique made the right call to leave out his South American players for the weekend trip to San Sebastian, adding: ?I do not know the dressing room of Barcelona, so I cannot comment on Luis Enrique?s decision.

?Everyone faces decisions regarding the dressing room and Luis Enrique is best placed to make those decisions. It looked like a fair one.?

Ancelotti was also forced to defend Gareth Bale after the Welshman came in for criticism following Madrid?s 2-1 defeat at the hands of Valencia at the weekend.

The former Tottenham winger was accused of selfishness after opting to shoot rather than passing the ball to Karim Benzema in a dangerous position.

However, Ancelotti has stressed the 25-year-old made the right decision and denied that he would be dropped for the last-16 clash with Atletico.

?I do not think Bale is selfish. I have seen the situation again and it was not easy to pass the ball, it was very complicated. He had no room and he tried to shoot,? the Italian said.

?There is no need to talk about Bale. He knows very well when he needs to pass but he took the right decision.

?If he feels pressure it is positive because he has scored goals in the finals he has played in. Against Atletico he will play.?

Barcelona have a future thanks to me – coach Koeman