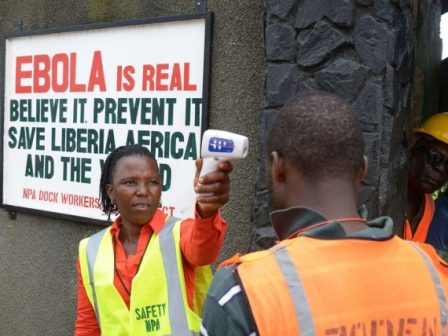 A third American aid worker has been diagnosed with Ebola.

The missionary group SIM USA announced Tuesday that one of its American doctors has been diagnosed with Ebola in Liberia. The doctor was treating pregnant women and those giving birth, in the capital city of Monrovia.

?He was not treating Ebola patients in the hospital’s isolation unit, however. The group said in a statement that it isn’t known how the doctor was infected. The doctor isolated himself as soon as he developed symptoms and has been transferred to the Ebola isolation unit. He is doing well and is in good spirits, according to SIM USA.

In a related development, Kent Brantly, an American doctor earlier diagnosed with Ebola and now recovering from it, gave his first interview to NBC’s Matt Lauer?told Lauer that on July 23rd, when he first became ill, he knew something was wrong.

“I woke up that morning and really I just felt a little off, I felt a little warm, I felt under the weather,” Brantly said. “I took my temperature and it was 100.0 I think.”

Brantly told Lauer he was thankful his wife and two children had just left a few days before to attend a wedding in Texas. He told Lauer he was not aware that there was one night doctors thought he would die, but said he remembers a night where he felt he wouldn’t make it.

“I felt like I was about to die and I said to the nurse who was taking care of me, ‘I’m sick, I have no reserve and I don’t know how long I can keep this up,” he told Lauer.

Including Brantly, more than 240 health care workers have been diagnosed with Ebola in the West African outbreak, and more than half have died, according to the World Health Organization. In all, Ebola has infected more than 3,000 people and killed more than 1,500 in this outbreak, the largest in history.

“My heart was deeply saddened, but my faith was not shaken, when I learned another of our missionary doctors contracted Ebola,” said Bruce Johnson, president of SIM USA, in a statement. “We have gifted Liberian doctors, medical staff and support staff who are carrying on the fight.”

Another aid worker with SIM USA, Nancy Writebol, also became infected with Ebola while working in Liberia. She was flown to the USA for treatment with one of the few doses of an experimental medication, ZMapp, and survived. Writebol is scheduled to make a public statement Wednesday. The maker of ZMapp, based in San Diego, has said its supplies of the unapproved drug are gone.

Brantly also developed Ebola while working in Liberia with a different aid group, Samaritan’s Purse. He also was flown to the USA for treatment. He received both ZMapp as well as a transfusion from an African teenager who survived Ebola. Both Brantly and Writebol were released from the hospital last month. Neither had any sign of Ebola virus in their blood.