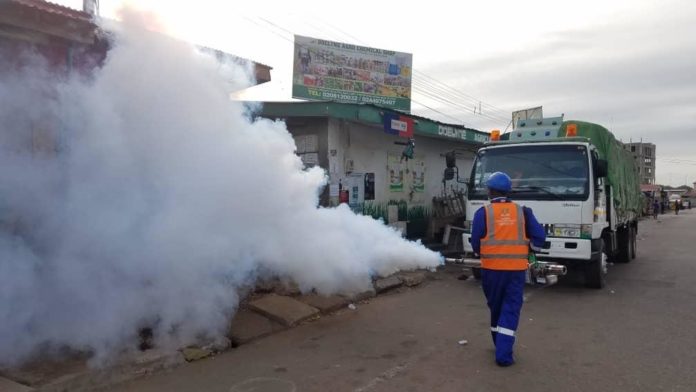 The Municipal and Districts Chief Executives (MDCEs) in the Assin North, Assin Central and Assin South, on Monday led the disinfection of markets in their areas and described the exercise as “highly successful”.

It was organised by the Ministry of Local Government and Rural Development in partnership with Moderpest and security agencies among others to curb the spread of the coronavirus in the country.

A total of 38 markets together with major streets, drains, lorry stations, institutions and business enclaves across the three districts were disinfected using several mechanised spraying machines, thermal foggers and a road sweeper.

The exercise was carried out under the supervision of the MDCEs with support from the Ghana Police Service, Ghana National Fire Service, Immigration Service, Ambulance Service and markets women who volunteered their services.

The Ghana News Agency observed that the areas were virtually a “pale shadow of themselves” as the usual daily vehicular movement and human traffic jam as a result of the brisk business activities were absent.

In separate interviews, the MDCES were highly impressed with the support they received from the traders, traditional authorities among others.

Mr Nicholas Fiifi Baako, the Assin Central Municipal Chief Executive expressed the hope that the public would follow experts’ advice and President Akufo-Addo’s directives to prevent the spread of the COVID-19.

Mr Derick Owusu Ambrose, the District Chief Executive for Assin South was full of praise for the traders and residents for their cooperation.

He said two markets at Assin Ando and Nyankomasi Ahenkro were disinfected and the exercise would be extended to cover all villages.

He reiterated Government’s commitment to release all its financial arsenals and resources towards the fight against COVID-19 and that people must respond to directives for a swift end of the pandemic.

The DCE appealed to public institutions, particularly commercial outlets to implement the social distancing recommended as a safeguard.

While commending the public for their compliance and support, he called on all well-meaning residents to support the Assembly to embark on the exercise.