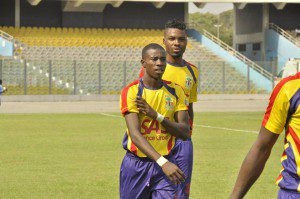 Hearts of Oak winger, Thomas Abbey has stated that, the Phobians international friendly game with the Libyan giants Ahly Tripoli will ginger the team ahead of the upcoming season.

Hearts of Oak will battle Al Ahly Tripoli in an international club friendly slated to come off on the 14th and 16th December, 2015 in the Libyan capital.

Though the Phobians are yet to make any significant signing, they are preparing feverishly for the upcoming season.

And according to their experienced winger, Thomas Abbey, their friendly game with Al Ahli Tripoli will ginger the club ahead of the season.

“It is good to play friendly games when preparing for the season. Playing an international club friendly sometimes brings out the best in the team and I believe that our friendly game with Al Ahly Tripoli will ginger the team ahead of the upcoming season, ‘Thomas Abbey told Ghanasoccernet.com.

The 25-year old speedster added: “Last season we disappointed our fans due to our performance and the position we placed on the league A new season is about to start and we are working tirelessly to put smiles on the faces of our fans.”

The embattled Phobians left for Libya this morning.