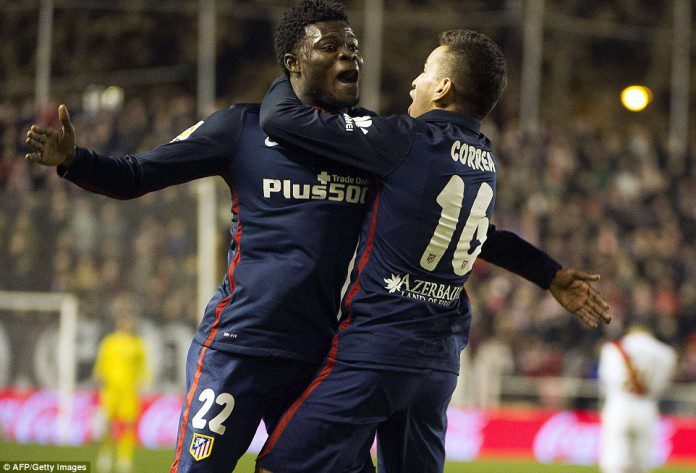 Fast-rising Ghanaian midfielder Thomas Partey was the architect of a mellifluous assist for Atletico Madrid when they recorded a 2-0 win over Rayo Vallecano in the Spanish La Liga on Wednesday night.

The 22-year-old prodigious midfielder had replaced former Chelsea and Liverpool forward Fernando Torres just after the hour mark with Atleti struggling to break down the resolute Rayo defensive network.

French forward Antoine Griezmann and Torres had all failed to find the net with despite having a couple of decent chances while supplies from midfield were not forthcoming.

But Partey tossed himself onto the Estadio del Rayo Vallecano pitch and began to change the texture of the game for Diego Simeone’s men, pulling the strings from midfield with impressive touches, gagging the spaces and distributing visionary passes.

With his presence, Atleti’s opening goal was surely in sight but it arrived with two minutes of normal time remaining. The former Tema Youth midfielder applied an sweet chip to brilliantly outwit a Rayo defender to find Angel Correa and the Argentine beautifully finished off the move.

Partey’s assist untied the game for the second-placed Atleti as Antoine Griezmann latched onto a Jackson Martínez assist to score his 9th league goal of the season to seal the points for Atleti.

Wednesday night’s appearance was just Partey’s fourth league game of the season, making up 97 minutes of La Liga football since the start of the season.

The young Ghanaian midfielder who is yet to be considered by Ghana coach Avram Grant for a senior call-up has already scored for the Atleti in the Copa Del Rey against Reus Deportiu in mid-December.

He spent last season on loan at Almeria where he scored four league goals in 31 appearances in the Spanish top-flight.