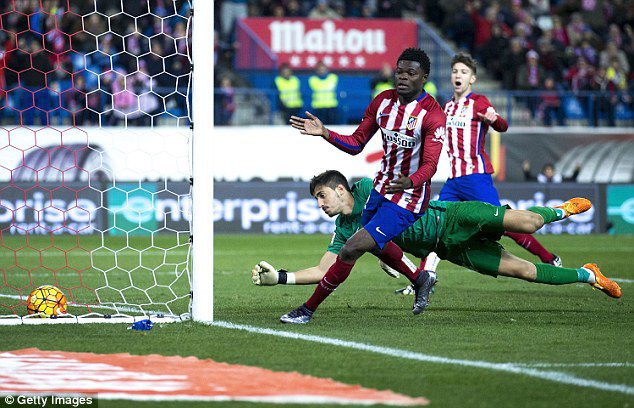 Partey scores the goal for Atletico Madrid over the weekend

According to a report by the Caught Offside, the Blues are considering a January swoop for the midfielder who dominated the headlines in Spain over the weekend.

The report claims that the youngster’s recent showing has forced Chelsea to make the move of signing Partey even though he has been limited to playing from the bench this season.

The report in Caught Offside claimed: “The Blues enjoyed the best years of Michael Essien’s career—with the Bison winning the Champions League and numerous other honours at Stamford Bridge—and Partey could be being lined up as the Black Stars’ long-term successor in west London.

“With both Nemanja Matic and Cesc Fabregas linked with moves away from Stamford Bridge, Partey could move to the Premier League now and would enjoy the time to adapt during this transitional season, before the Blues look to regain their title next season.”

The English club has not officially confirmed the move but the report is widespread with some sticking points for the move to take place.

Partey won’t qualify for an automatic work permit to play in the UK as he should play 70% of Ghana’s Senior national team matches over the past two years to get the clearance to play in England.

The midfielder is yet to play for Ghana at any level.

He has also not gained a regular first team starting place even though he has excelled when he was brought on a substitute.

Partey stole the headlines over the weekend when the substitute scored the only goal for Atletico as they beat Levante to go top of the league ahead of Barcelona.

The Ghanaian has only been considered for selection by Atletico Madrid as injuries have ravaged their squad this season after returning from a loan stint at Almeria last term.