Thousands of people gathered outside Parliament on Friday to demand the resignation of South African President Jacob Zuma. 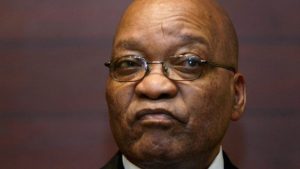 The protest went on peacefully under the watchful eye of police.

It was part of a nationwide shutdown amid growing calls for Zuma to resign. Pro-Zuma marchers also arrived in Parliament to counter anti-Zuma protests.

“It is one of the biggest protest against Zuma during his tenure,” a police officer said on condition of anonymity.

Elsewhere in Cape Town, protesters formed human chains along streets, to express their unhappiness with Zuma who is facing mounting pressure to resign after he reshuffled the cabinet last week. The reshuffle affected 10 ministers and 10 deputy ministers, notably Finance Minister Pravin Gordhan.

The reshuffle led to ratings agency Standard and Poor’s downgrading of South Africa’s credit outlook to junk status and a significant weakening of the rand.

Leaders from civil society, religious bodies and even ANC stalwarts have called on Zuma to quit.

On Thursday, the ANC warned against violence during the protests.

It distanced itself from radical ANC members who threatened to take up arms in self-defence during the national shutdown, organized by opposition parties and civic organizations.

“We condemn in the harshest possible terms reports of people seeking to take up arms in the name of the ANC. Such behavior has no place in a democratic society,” the party said.

The ANC also denied reports that it has organized pro-ANC marches to counter the protests.

There have been reports of sporadic violence and intimidation in the run-up to the planned so-called “day of action” on Friday.

“Such actions have no place in democratic South Africa and threaten to turn the country back to a time where civic activism by citizens was stifled in the name of ‘preserving law and order’,” the party said.

The ANC called on all South Africans to organize in a calm and measured fashion.

“We should not allow inflammatory rhetoric from certain elements, including on social media, to damage our fragile social fabric and turn South Africans against each other,” said the organization.

The ANC said freedom of expression and association are the unalienable rights of all South Africans and are guaranteed by the Constitution.

By equal measure, in line with the right to freedom of association, it is also the prerogative of those who choose not to participate in any demonstrations, to not do so, the party said, adding that this should be respected and any form of coercion with regards to participation in the planned demonstrations, should be condemned. Enditem

Afghanistan No Longer Priority for West, So US Troops to Exit Despite Violence Reports