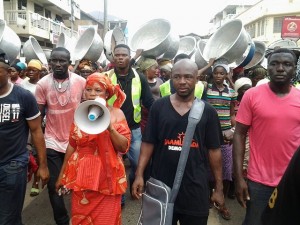 The protest which was organized by pressure groups Let My Vote Count Alliance and Alliance for Accountable Governance, was heavily attended by members of the main opposition New Patriotic Party (NPP), who are also demanding same reforms. The demonstrators, clad in black and white attire, planned to use their protest to compel the EC to embark on a validation of the voters’ register before the 2016 polls as recommended by a panel of experts it set up following the presidential petition at the Supreme Court.

They said that they will not rest until the EC obey the rules.

The Ashanti Regional Chairman of the NPP Benard Antwi Boasiako said the EC appears not serious in what would guarantee free and fair elections.

“We’ll not wait for the nation to be plunged into a civil war because of elections. We must avert the looming dangers which the action of the EC is likely to bring,” he said.

According to the organizers, the protest will be replicated across the country, until the EC meets their demands. Enditem