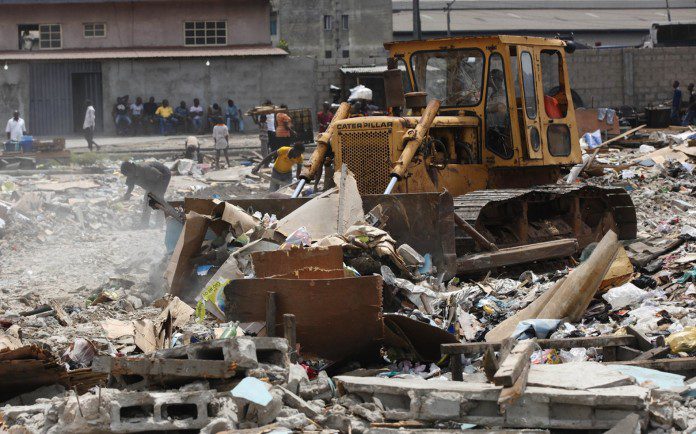 One week after the forced evictions began suddenly at Ijora Badia East on 18 September 2015, scores of women and children sleep under makeshift shelters at the demolition site. The heavy rains that fell throughout the Eid-el-Kabir (Sallah) holiday highlighted the misery of homelessness.

As evening fell on the Sallah holiday, two young women each holding young babies huddled under a tarpaulin shelter as the rain fell. One of them, Olabisi Malomo bounced her crying baby on her knee as she recounted what happened, ?I?ve stayed here at this railway line for 25 years. When they wanted to demolish our houses, they just came without information, said they wanted to demolish. One night we just see caterpillar (bulldozer). Some people said they wanted to build a gutter. Less than four hours later, all these police and demolition squad came. They said we should begin to pack our load. After less than 30 minutes, they began to demolish.?

Since the demolition, Olabisi Malomo has been sleeping in a makeshift shelter with her six children, her elderly mother, her sister and neighbors and their children. Before the demolition, she worked as a petty trader, but all her goods were lost in the demolition. ?I am sleeping outside with my six children. As rain is falling now, we are under the rain. The way they do us for this community, it?s not good. In this Nigeria, they treat we poor people like we?re goats. We aren?t goats; we are human beings. They should help us. We have suffered too much.?

The forced eviction started on 18-19 September and continued again on 22 September, moving from Badia East toward Badia West, displacing more than 10,000 people to date. Although technically a private demolition exercise by the traditional landowners, the Ojora Chieftaincy Family, the Nigerian Police Force and Lagos State Government have been providing material support throughout the exercise. Scores of policemen have been on ground every day, with a police officer seen riding on the bulldozer itself. On Tuesday, a well-known official with the Lagos State Physical Planning and Development Authority (LSPPDA), Mr. Tunde Olugbewesa, was on ground throughout the day with other officials, overseeing and directing the demolition.

In February 2013, over 9,000 people were forcibly evicted from the neighboring part of Badia East in a demolition carried out by the Lagos State Government to make way for a housing project built under the Home Ownership Mortgage Scheme (HOMS). The demolition violated the World Bank safeguard policies on involuntary resettlement, which the State Government committed to follow when it accepted $200 million to upgrade Badia and other slums in Lagos.

There is serious concern that Lagos State Government is enabling the present demolitions so that it can use the land now being cleared for the continuation of the HOMS housing scheme.

On Monday, 21 September, staged a peaceful protest outside the Lagos State Governor?s office, calling for Governor Ambode to intervene to stop the demolition and protect the victims. In response, a meeting was held on Tuesday, 22 September, between representatives of the evictees, their legal representatives, and a government delegation led by the Commissioner of Local Government and Community Affairs. The outcome was a stoppage order issued late on Tuesday, since when the demolition seems to have halted ? although no one knows for how long.

While we applaud the stoppage of the demolition since Tuesday evening, we remain deeply concerned about the thousands of evictees who have suddenly been rendered homeless, as well as the 20,000 or more others in Badia East, Badia West, Apataaro, and other neighboring areas of Apapa LGA / Apapa-Iganmu LCDA who are still at risk should the demolitions resume.

Another young mother of two, Abimbola Joshua, spoke as evening fell on the Sallah holiday from inside her makeshift tent, surrounded by children escaping the rain: ?The way the King Ojora Fatai treats us is very bad, he treats us as slaves. I was born and brought up in this Ijora Badia East. I have children. My mother is here. My father died of stroke due to all the demolitions.?

More than her lost home, Abimbola lamented the demolition of the church that she and her neighbors used their money to build ? and which she begged Ojora agents not to demolish last Friday. Relating how her pleas were ignored, she says, ?I want Fatai Ojora to know that, anything he is doing on this earth, he should remember God. ?Because when we finish everything on this earth, we go to God. And God will judge everyone according to his or her behavior on earth.?

An elderly woman with only one good leg, using a single zinc sheet to cover her and a mother nursing a 1.5-month-old baby next to her from the rain, pleaded: ?Make the Government help us beg Aromire Fatai to leave us alone. Make him forgive us. We?ve suffered too much.?

We join the victims in calling for mercy from the Ojora Chieftaincy Family and urgent protective action from the Lagos State Government and the Federal Government, which jointly have the responsibility of preventing forced evictions, protecting victims, and ensuring effective remedy.

SIGNED BY THE FRIENDS OF BADIA EAST:

For other videos and information about the evictions, visit: www.justempower.org