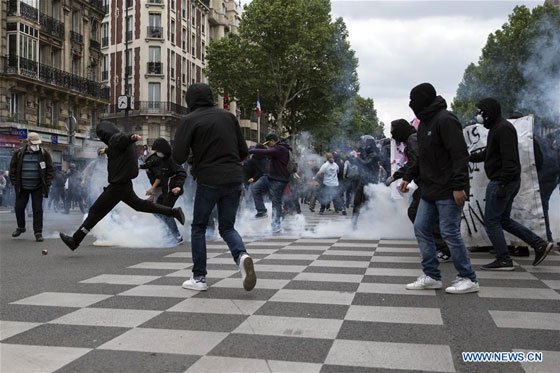 Philippe Martinez, head of CGT union was quoted as saying by local media, “Today, there is a widespread strike and that’s a good thing. We have not been heard, so we will make ourselves louder.”

To William Martinet, president of the country’s main student organization UNEF, “French President Francois Hollande is cut off from social reality. He was not elected for this labor law.”

Earlier on Tuesday, Hollande said he would “not give in” to protesters on a reform which, according to him, would “provide visibility and stability to create jobs.”

The Socialist leader reiterated that “it takes time for those reforms to take effect.”

Rebuffing the politician’s words, the crowd in Paris, where up to 12,000 protesters were gathered, waved banners reading: “What the government does, streets will undo.”

Organizers said 10,000 people participated in anti-labor reform demonstration in Nantes, western France, while police put the number at 3,500. In the southern city of Marseille, between 6,800 and 8,000 were numbered and between 1,700 and 7,000 in Lyon, central France.

In the western French city of Rennes where clashes erupted over the weekend, police data showed 1,100 people took part in the protest against the 2,000 figure tallied by the trade union.

The sixth protest to date was also tainted by clashes between demonstrators and police with scores arrested during Tuesday’s marches mainly in the French capital, Nantes, and Bordeaux.

In a visit to Rennes to support riot police enforcing a protest ban after violent incidents, Interior Minister Bernard Cazeneuve on Sunday said 1,300 people had been arrested across France since the start of the protests in March.

Rail, air traffic, and refinery staff as well as truck drivers were among those who planned to stop working to oppose the labor reform, causing significant disruption across the country.

State railway SNCF said stoppages by its workers were set to cut some services by up to 70 percent on Wednesday. About 15 percent of flights would be cancelled at Orly airport on Thursday, the DGAC air transport authority said.

Officials said the bill would facilitate hiring and help bring down the joblessness rate, which is currently 10.2 percent in the country.

Opponents of the bill denounced what they see as a pro-businesses reform that would increase low-paid jobs, further weaken workers’ economic situation, and worsen working conditions.

New nationwide demonstrations are scheduled for May 19.

United Russia Ahead With 49.66 Percent in Parliamentary Vote – Commission