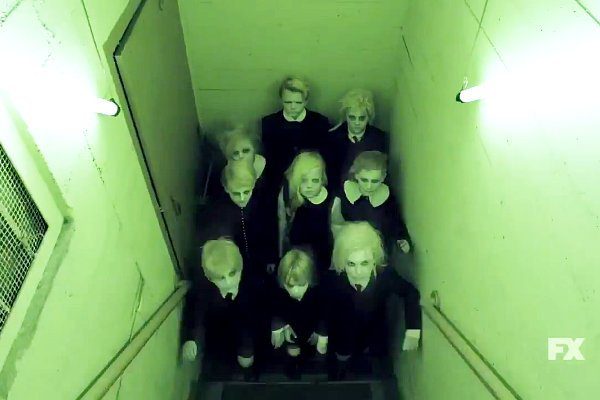 FX has just dropped three new teasers for ?American Horror Story: Hotel?. Still not sharing actual scene from the upcoming installment, the videos entice viewers with creepy imagery that will leave everyone haunted.

One of the videos titled ?Towhead? sees a group of kids, who are apparently ghosts, lurking in the corners of the Hotel Cortez. The second promo titled ?Sleepwalk? shows a poor guy trapped in a mattress which is abandoned in a hallway. ?Don?t sleep a wink?,? it warns people.

The third video titled ?Jeepers Peepers? isn?t that scary, showing someone knocking on the door and an eye peeping through a keyhole. It hints that the guests at the titular hotel may come with bad intentions as the caption reads, ?Some doors are better left unopened??

?Hotel? is scheduled to debut Wednesday, October 7 on FX. Lady GaGa plays Elizabeth, the hotel owner, who is described as ?a very wealthy social doyenne who is consumed with art and fashion and people.? Other stars in this season include Sarah Paulson, Kathy Bates, Angela Bassett, Evan Peters, Wes Bentley, Chloe Sevigny, Matthew Bomer and Naomi Campbell among others.

American architectural designer that has a close bond with China

Death of US National in hotel room: Two persons arrested