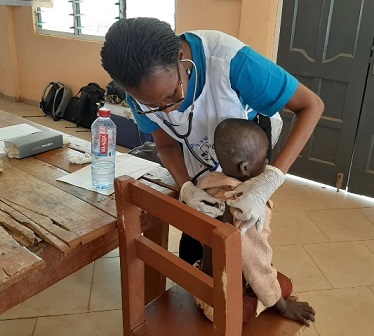 The Centre for Child Development (CCD) have screened street children and the less privileged in the Bolgatanga Municipality for various diseases.

The exercise, in collaboration with the Children’s Ministry of the Catholic Charismatic Renewal (CCR) and the Aide á la vulnèrabillitè, a charity-based group, was intended to put smiles on the faces of the beneficiaries.

The beneficiaries were presented with some slightly used clothes and meals and drinks.

Speaking on the medical screening, Mr Charles Lwanga Moandiyiem Tabase, the Chairman of the charity-based group, said the group comprised health professionals of various categories, including Physicians, Ear, Nose and Throat professionals, General and Paediatric nurses, among others.

“We are having a head to toe assessment of the children, we are looking out for skin diseases, and other general problems. For the adults, we are assessing their Blood Pressure (BP), their blood sugar levels, and also Rapid Diagnostic Test for malaria for all the participants.”

In an interview with journalists, Mr Felix Frederick Amenga-Etego, the Project Manager for the CCD under the Catholic Bishop’s Secretariat in Bolgatanga, said the three organisations were Christian groups who believed in the virtues of Christ.

He said the Children’s Ministry aimed to train children to grow up in faith and emulate the virtues of Christ.

He said the exercise was also to create the opportunity for the children in the Ministry to experience the challenges their under-privileged colleagues experienced on the streets.

Mr Amenga-Etego said there were plans under a programme dubbed ‘Drop-in and Child Trafficking Support Programme’ to support street children and give them shelter at night.

“We also reach out to them on the streets to meet their needs. Society should be able to cooperate with these children to understand why they are on the streets and help them meet the needs that brought them to the streets so that they can get back into their normal homes,” he said.

Mr Jacob Alhassan, the Coordinator of the CCR at the Sacred Heart Cathedral Parish of the Catholic Church, said the initiative was to demonstrate to the children in the Ministry the need to show love and compassion to the needy in society.

He said the Ministry embarked on the same exercise last year and was hopeful that they could organize the activity twice a year to enable the vulnerable children to feel society’s love.

Mr Ibrahim Tanko, a visually impaired man, who benefited from the screening exercise, said it was beneficial.