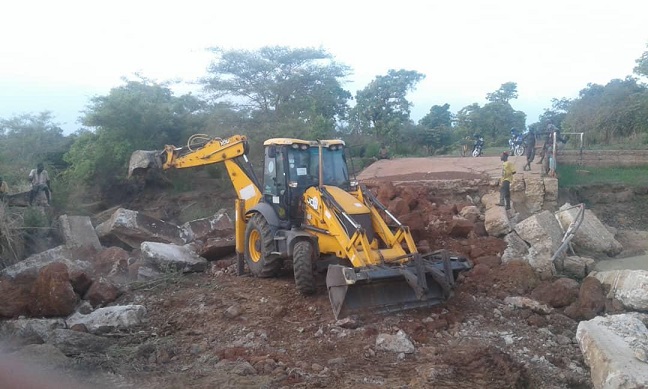 The Nakor, Polee and Lanyiri basic schools in the Wa West District of the Upper West Region risk closure due to a broken bridge that has cut the communities off from towns where the teachers reside.

Mr Darzaa Nachinaa, the Dagaaba Chief of Nakor Community, expressed worry over the situation and said the teachers were unable to access the schools, all in the Tanina Electoral Area, during the rainy season.

“The teachers come and park their motor bikes here (at the river) and the children will then help them to cross, in order to get to the schools to teach, if not our school would have been closed down”.

Mr Nachinaa, in an interview with the Ghana News Agency, said several appeals to the authorities to fix the bridge had yielded no results and called on the Government, benevolent organisations and individuals to go to the aid of the communities to facilitate access to the schools for teaching and learning to continue.

He said the bridge linked the Polee, Bawa, Lanyiri and Nakor communities to Piisi and Wa, where some teachers resided.

Mr Nachinaa said the broken bridge had not only affected academic activities but the socio-economic lives of the people as they were unable to access the markets, health centres and other social services at Piisi and Wa.

“This is the road that the tractor uses to our communities to plough, but during the peak of the rains, no tractor can come here. After harvesting how the produce can get to the market is another challenge,” he said.

“That was how we suffered last year until the rains stopped. So we know that this time if we don’t do anything to help ourselves we will suffer again when the rains start.”

Hence the affected communities had taken the initiative to improvise a bridge with logs to enable them to cross the river, Mr Nachinaa said.

Members of the communities had also contributed about GH₵2,000.00 with which they had contracted a bulldozer to remove the broken bridge from the water way for free flow of water to avoid flooding, he said.

Mr Seidu Kasim, the Assembly Member of the Tanina Electoral Area, said performance at the affected schools could be affected if nothing was done about the bridge since the teachers could not access the schools.

Also the inability of the people to access the markets to sell their farm produce “is causing financial loss to the state because they go to sell and also pay taxes to the government,” he said.

Mr Kasim said he had reported the problem to the appropriate authorities including the Department of Feeder Roads but was yet to receive a response from them.