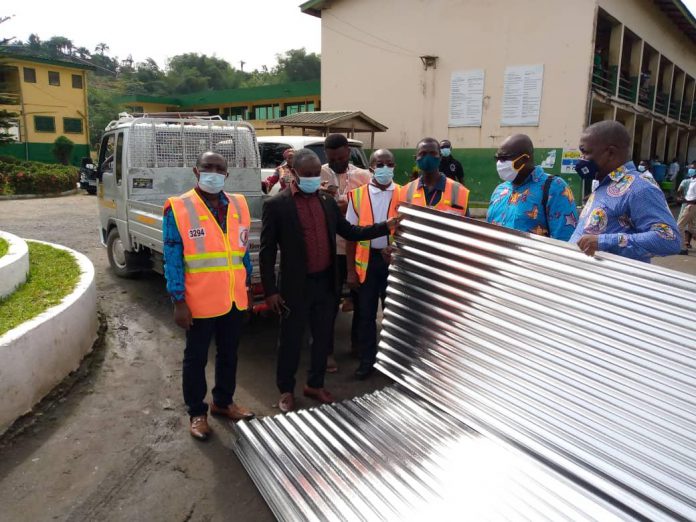 Three schools at Tarkwa in the Western Region that were displaced on Tuesday after a heavy downpour have received support from the Tarkwa-Nsuaem Municipal Assembly.

At the Tarkwa Senior High School, some teachers’ bungalows were flooded while others had their roofs ripped up.

Three unit-classroom blocks at the Trinity Presbyterian and the Saint Matthew Catholic Basic Schools also had their roofs ripped off by the storm.

Presenting ten packets of roofing sheets to the schools, Mr Kessie said the assembly decided to offer quick assistance after the technical team led by officials of NADMO had assessed and submitted the report on the disaster.

He said the assembly had temporarily solved the challenge to enable the pupils to continue with their academic work.

“For Trinity Presbyterian and Roman Catholic Basic Schools, the assembly would have to do reroofing so the works engineer would do the quantities as soon as possible for work to commence,” the MCE said.

He commended the Presbyterian church for the steps they had taken before his arrival, added that this collaboration would speed up development in the Municipality

The Circuit Supervisor of GES, Mr William Boss Baiden, who received the roofing sheets together with the beneficiary schools commended the assembly and NADMO for the timely intervention.

Mr Francis Amoah, Assistant Chief Disaster Control Officer of NADMO, advised the residents of Tarkwa-Nsuaem to desilt their chocked drains frequently, refrain from throwing garbage into gutters, adding that, they should also cultivate the habit of planting trees as this serves as storm brakers.