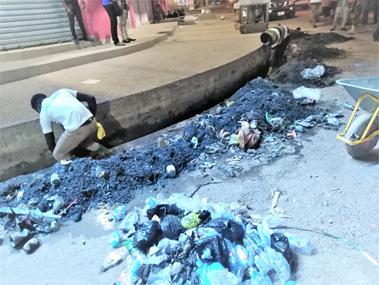 Earlier this year, Nana Sompahene Osei Kyei-Mensah-Bonsu, the Minister of Parliamentary Affairs and Majority Leader, announced a proposed Sanitation and Pollution Levy to help address the sanitation issues in Ghana.

The Majority Leader, who temporarily became the Caretaker Finance Minister, made the announcement when he eloquently presented this year’s Budget Statement and Financial Policy of the Government of Ghana, on behalf of Finance Minister Ken Ofori-Atta, who was then out of the country for medical attention.

Thanks to the Almighty God for healing mercies! Mr Ofori-Atta is back in the country, fully performing his duties as Finance Minister.

Reading the Budget, the Caretaker Finance Minister explained that the introduction of the Sanitation and Pollution Levy would help address sanitation issues in the country.

The Sanitation and Pollution Levy of 10 pesewas would be incorporated into the proposed fuel levy, as the rate would be charged on the price per litre of petrol/diesel under the Energy Sector Levies Act (ESLA).

Nana Sompahene Kyei-Mensah-Bonsu assured Ghanaians that the Government would embark on a number of projects including the re-engineering of landfill sites at Kpone and Oti, the construction of waste recycling and compost plants across the country and the construction of more sanitation facilities to facilitate the elimination of open defecation.

“Mr Speaker, these are all very critical investments that have to be made for the benefit and dignity of all Ghanaians. These will ensure sustainable sanitation management, improve the quality of life and reduce the number of deaths and diseases from poor sanitation,” he said.

The Majority Leader, an Urban Planner and Member of Parliament for Suame in the Ashanit Region, said kudos to the Government for working at constructing more sanitation facilities to enhance the elimination of open defecation. That the whole of Ghana may become ‘Open defecation free’ (ODF)!

“Open Defecation” is a term used to describe the human practice of defecating outside (in the open) rather than into a toilet.

They do so either because they do not have a toilet readily accessible or due to some habitual personal practice.

The practice is common where toilet facilities and sanitation services are not available but even if available, behaviour change efforts may still be needed to promote the use of toilets.

Open defecation is an uncivilised and dangerous practice. Apart from making oneself a target of snakes and other pesky animals, the stench and buzzing of flies on uncovered faecal matter make it nasty to behold, and can further pollute the environment and cause health problems and diseases.

Open defecation is statistically linked to child mortality, poor nutrition, poverty, and large disparities between the rich and poor.

Therefore, eliminating open defecation is an important part of the efforts to ensure clean and safe environment.

Ending open defecation is an indicator being used to measure progress towards the Sustainable Development Goal Number Six. Extreme poverty and lack of sanitation are statistically linked. Therefore, eliminating open defecation is thought to be an important part of the effort to eliminate poverty.

However, one area of concern is the releasing of faecal waste into some drainage outlets in Ghana.

Take for example, what not long ago, happened to some people who were whiling away time in a certain community in Accra, after close of work at a joint.
The joint is located some few metres from a storm drain.

The people in the area call the drain gutter, but whether gutter or otherwise, that drainage outlet was constructed mainly to evacuate heavy rain waters into to the main water courses.

When bottles and glasses were clinking with cheers, and joy was almost at acme, there came nauseating stench from the drain that totally marred the joy and beauty of the evening.

Upon close watch, it was realised that some houses in the neighbourhood had released their liquid faecal waste into the drain.

In this age and time, can one imagine seeing people, early in the morning, coming out to throw their urine into nearby gutters or drains?

Why do some people “do it” into polythene bags and throw them into the gutters? These gutters are unsightly choked with all kinds of filled plastic materials, which obstruct the free flow of water.

The efforts of the Government to make Ghana Open Defecation-Free must highly be commended. The releasing of faecal liquid waste into open gutters and drains can, however, be said to be another form of open defecation.

The practice must stop!!!

What a joy it would be to see the whole of Ghana, every nook and cranny, very clean as a sanctuary, a paradise on earth, a Janna or nirvana.

It behoves on all of us to help government achieve this enviable goal to make Ghana open defecation-free. It can be done.