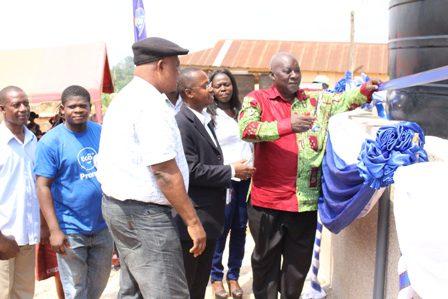 Over 3,000 residents of Dawurampong and surrounding communities in the Gomoa West District of the Central region in the community will now have access to clean and safe water with the successful completion and commissioning of a new borehole and water tank. Tigo Ghana responded to the needs of the people, following the acute need for safe drinking water for the people and to save the community from risk of water-borne diseases, among other hardships.
Until last month, the residents had to walk long distances to get water for drinking, cooking and washing. A borehole constructed some years ago in the community had been abandoned, because it hardly functioned, leaving a 50-year-old unhygienic well to serve the people in the community. During the commission of the water project at Dawurampong, the Chief Finance Officer for Tigo Ghana, Philip Amoateng, said Tigo was worried about the source of drinking water in the community, hence the construction of the borehole project which will not only provide residents with potable water but also require very little maintenance.
He explained that in keeping with Tigo?s commitment to invest in local communities through health and education, the project will improve productivity and greatly enhance the wellbeing of the people living in the community.
He said that in addition to providing reliable access to communication services, Tigo is committed to fostering improved living standards in the communities where it operates, adding that: ?We want to embark on social interventions that transforms the lives of people.?
Nana Korko Mensah IV, the Chief of Dawurampong, and the Member of Parliament for Gomoa West, Hon. Francis Kojo Atta, thanked Tigo for the kind gesture and urged the residents to take good care of the project.
Tigo in September 2013 launched ?Community Champions?, an initiative to respond to the peculiar needs of various communities. Several projects undertaken include the donation of 100 bicycles to Family for Organised Lives (FFOL); renovation of the Tafo Maternity Unity, donation of hospital equipment to the Keta government hospital among several others.

Festival edition of Wikimania 2022 comes off on August 11-14