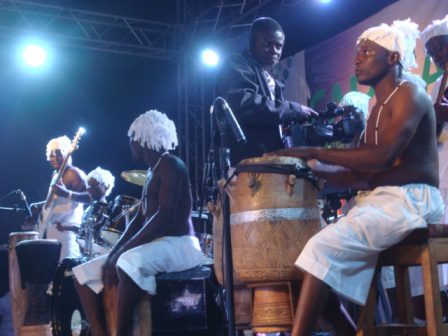 The annual Homowo bash, took a new twist this year, as the indigenes of the various Ga communities and visitors witnessed a huge turn up and excitement from various artists who graced the occasion.This year?s event dubbed, ?Capital TV Homowo bash? was held on Saturday, August 17 at Mantse Agbonaa. According to the Chief Executive officer of Capital Line Group (CLG), Mr. Benjamin, Capital TV partnered the event as a result of their corporate social responsibility.

He also assured the Ga community of continues support from the company and to also change the face of entertainment in the subsequent years. Mr. Benjamin said they are committed to the development agenda of the community in which they operate, and bring about peace and joy between the various groups.

Prior to the event, women who took part in the cooking competition earlier in the day, were awarded with prizes ranging from: microwave, electronic appliances and cartons of fruit drinks. Raising the curtains on the night was the Stationary Wulome Sensational dance group, clad in their all white attire with their various traditional instruments who performed exceptionally to the delight of the patrons.

The classic performance from the Ga dance group opened the flood gate for the secular artists to take their turn on the stage to prove their mettle on the night. Obofour, Adotey, Lutah, amongst others, were the first to craft their act on the huge stage. Just after their performance was the new kid on the dancehall block, Episode, whose energetic and creative act on the stage sparked up the place.

One of the young voices on the highlife scene, Kesse, was phenomenal on the night with his ?Jaw breaking.? Screw face was unstoppable on stage as the audience kept chanting his name prior to his performance. The crowd sung along most of his songs and one striking thing was when he opened his act with most of the songs by missing hiplife artiste, Castro, to pay his respect.

Tinny, who was one of the artists expected to thrill the audience on the night, disappointed them when he encountered slight hitches and had to exit the stage. Danso Abiam as usual, was on top of his game with known faces like Shiloh, Adolf Tagoe, King David, Arab B, Chameleon and others.