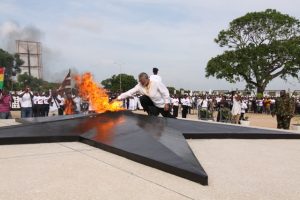 Mr. Rawlings is expected to deliver the keynote address at the event.

The 31st December was a popular uprising in Ghana in 1981 to overthrow the government of Dr Hilla Liman led by Flight Lt Jerry John Rawlings.

Meanwhile,  members of the United Cadres Front (UCF) of Ghana, commended persons  who sacrificed their lives to lay the solid foundations for the unprecedented discipline, truth, honesty, integrity, probity, accountability, transparency and fellow-feeling that characterized the era and became the foundation that has engendered the peace and stability that we now enjoy as a nation.

In a statement signed by secretary of the Cadres, Efanam Felix Nyaku, it said the current political dispensation where people have become individualistic, self-centred and non-charlant about issues of national importance, apart from those that border on materialism and parochial political interests, there is the need to remind Ghanaians that, some people brought an awakening to the entirety of Ghanaians to stand up and be counted.

This year’s event is under the theme “The Principles Never Change.”