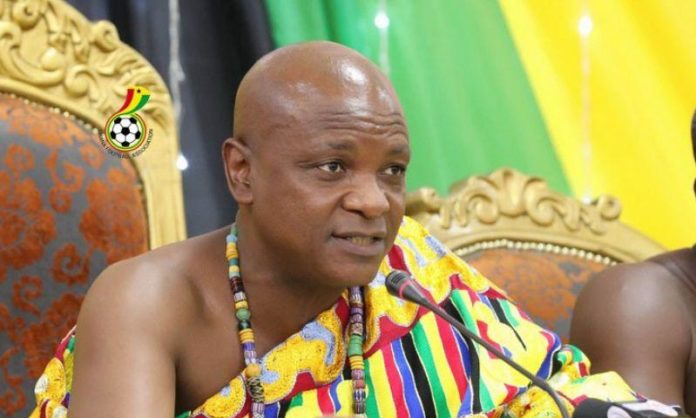 Togbe Afede XIV, the Executive Board Chairman of Accra Hearts of Oak, has thrown support behind some “under-fire” members of the board.

There has been a huge backlash among the supporters of Hearts and some board members, especially after the exit from this year’s Confederation of African Football (CAF) Confederation Cup last Sunday.

There was a scuffle between Mr. Elvis Hermann Hesse, the Chairman of the National Chapters Committee (NCC), and Board Member Mr. Vicent Sowah Odotei, which led to the arrest of the supporters’ leader.

But Togbe Afede XIV, who is the majority shareholder of the Phobian club, at a press conference lauded the efforts of the board members for propelling the club to greater heights in the last few years.

“Sometimes I am amazed by the level of commitment from these people (board members) and, trust me, the successes of the 2021-22 season on the pitch, what we are doing at Pobiman, the commercial centre, and the new head office building would never have been possible without the dedication of the board members.

He added that he was investing money in the club because he was dealing with the right people to steer the affairs of the club and propel them to greatness.

“If I don’t trust them, they won’t be part of what we are doing. If they were not hardworking, we wouldn’t have achieved anything,” Togbe Afede stated.

Hearts have had a tough start to the season, which led to the sacking of coach Samuel Boadu, with Serbian coach Matic Slavko expected to take charge of the team in the coming days.