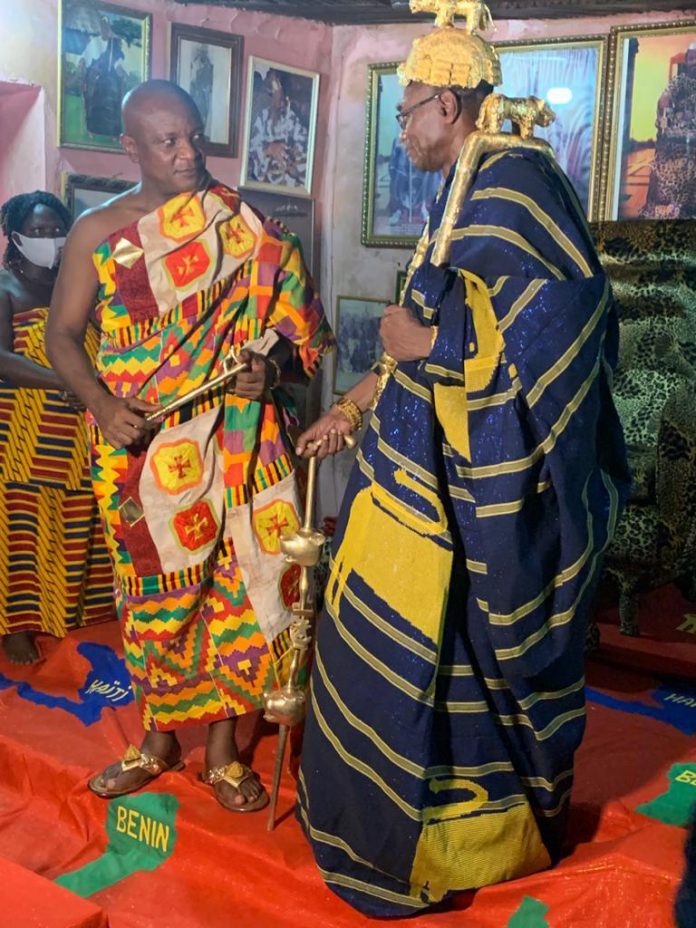 Togbe Afede XIV, the Agbogbomofia of the Asogli State has received the blessings of Togbi Kpodegbe Toyi Djigla, the King of the Allada Kingdom and the President of the Council of Chiefs of Benin on the idea to form “African Traditional Leadership Union”.

Togbe Afede as part of his visit to the West African Power Pool Secretariat in Cotonou, Benin, paid a courtesy call on Togbi Kpodegbe Toyi Djigla of the Allada Kingdom.

Issues discussed among the two Chiefs was the need to leverage chieftaincy as a tool of development.

The two traditional rulers stressed the need to make traditional leadership felt in the life of people in West Africa and the rest of Africa through the formation of a continent-wide union of African Traditional Rulers.

Togbe Afede emphasized that the realization of this laudable idea would only be made possible when all the Chiefs and Kings of Africa come together to form what he named African Traditional Leadership Union akin to the Africa Union which is dominated by political leadership.

Togbi Kpodegbe who was overwhelmed by the proposal felt elated and jumped at the agenda by declaring his unflinching support for it.

He explained that the idea was timely, indicating that Africa would have seen better development if this dream were successful in the days of the late Dr Kwame Nkrumah and Colonel Muammar Qaddafi of Ghana and Libya respectively who were astute and unrepentant Pan-Africanists.

The King of the Allada Kingdom pledged to rally the support of the Benin Council of Chiefs towards the realization of this dream.

He expressed his readiness to attend any forum for the formation of the “African Traditional Leadership Union.”

Togbe Afede later presented some Ghanaian regalia to King Kpodegbe Toyi who in turn honored Togbe Afede with a Golden scepter and some priceless traditional regalia of the Allada Kingdom.