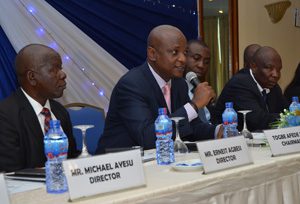 Togbe Afede (middle) flanked by Ernest Agbesi and other officials of the bank during the AGM.

Togbe Afede XIV, Chairman of the Board of Directors of NIB, congratulated management of NIB for achieving impressive operating results over four consecutive years.

However, credit impairment losses affected the bank, as total provision for the year amounted to GH?26.1 million compared to GH?37.3 million in 2012.

No dividend payment was proposed for the year ended December 31, 2013. This is to allow income surplus account to be­come positive in accordance with statutory requirement and best practice.

Managing Director of NIB, Ernest Agbesi, in a remark, said the bank expects to maintain a strong momentum buoyed by an aggressive Strategic Plan programmed between 2014 and 2016.

?This will enable the Bank forge the needed strategic partnerships which will reposition it for further competitiveness and to take ad­vantage of the emerging improved business environment.?

Workplace harassment is a major cause of poor performance – Health Tutor