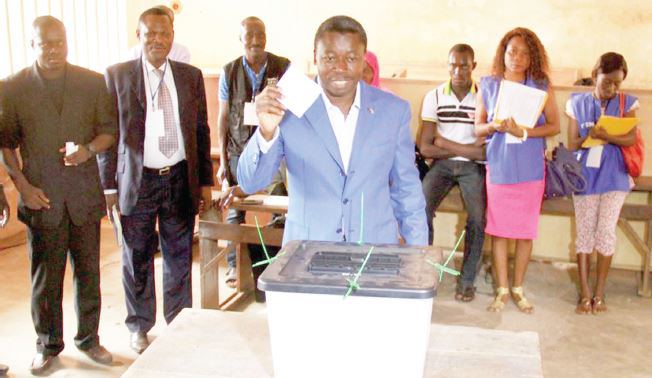 Results from six of 42 voting districts showed Gnassingbe with 64 percent, ahead of 33 percent for his nearest rival, Jean-Pierre Fabre, the head of the election commission said.

The rest of the votes were shared between the three other candidates, election commission chief Issoufou Taffa Tabiou told reporters. More results are due later in the day.

U.N. Secretary-General Ban Ki-moon praised Saturday?s vote and called on the country?s political leaders to ?continue to maintain the peaceful atmosphere? of the election process.

An observer from the regional bloc ECOWAS said Sunday there was no major incident in the voting.

Togo?s Independent National Electoral Commission has until six days after the polls closed to announce the results.  Officials said turnout among the 3.5 million eligible voters was between 53 and 55 percent, which is far lower than the nearly two-thirds of voters who took part in the 2010 presidential election.

President Gnassingbe is seeking a third five-year term, which would keep his family in power for nearly 50 years. He assumed office in 2005 upon the death of his father, Gnassingbe Eyadema, who ruled the former French colony for 38 years. Rights groups have criticized Togo for using violence against protesters.

Opposition leader Jean-Pierre Fabre, who also ran for president in the last election, is expected to come in second in the single-round presidential poll.

Given Togo?s history of post-election violence ? hundreds died in clashes after the 2005 vote ? diplomats and observer teams have called on leaders to maintain the peaceful atmosphere.

Security forces stepped up patrols as results were ferried to the seaside capital, Lome, for compilation.

The ballot was delayed by ten days to allow election experts to clean up the voter rolls, which the opposition said contained numerous errors that might favor the incumbent.

Some material for this report came from Reuters.

Sod cut for the rehabilitation of Dome-Kitase road