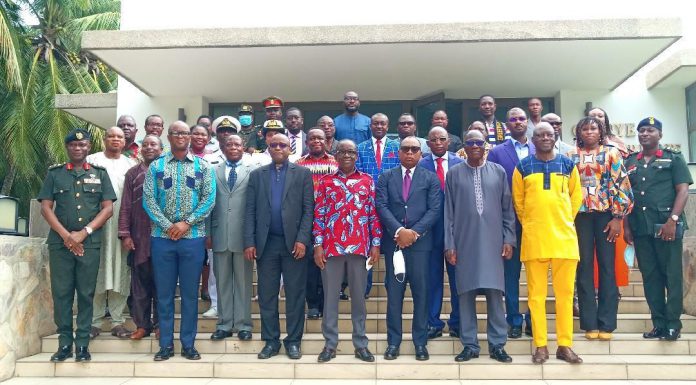 Togo has agreed to study a Provisional Maritime Boundary Line, proposed by Ghana, as part of efforts by the two neighbouring countries to delimitate their final maritime boundary.

This agreement was reached in a joint communique issued at the end of the Seventh Meeting of the Joint Technical Committee of the Ghana-Togo Maritime Boundary Delimitation Committee, held in Accra from June 22 to 25.

The Communique was signed by Brigadier General Emmanuel W. Kotia, the Co-ordinator of the Ghana Boundary Commission/Head of Ghana’s Delegation, and Mr Dammipi Noupokou, the Principal Negotiator of the Togolese Delegation.

It said the Minutes of the Sixth Meeting, held from 23rd to 25th March, 2021 in Lome, Togo, was adopted and signed.

It said the report on the Coordinates of Pillar 1, presented by the Joint Technical Sub-Committee, was adopted and signed.

“Upon the presentation of the Provisional Maritime Boundary Line by Ghana, the delegation from Togo took notice of Ghana’s proposed line and requested for time to examine it before the next Plenary Meeting,” it said.

The Communique said based on Togo’s decision to study Ghana’s proposed Provisional Maritime Boundary Line, the two Parties agreed to defer further discussions on the Provisional Arrangements to the next Plenary Meeting.

It reiterated the parties agreement to set up a Joint Sub-Technical Committee for the delimitation of the final Maritime Boundary; saying the Sub-Committtee shall submit its report at the next Plenary Meeting in Lome.

It said the next Plenary Session would take place in Lome, Togo from July 27 to 30.

The three-day meeting aims at resolving, amicably, the outstanding issues on the delimitation of the maritime boundary between the two neighbouring countries.

Ghana and Togo have been holding negotiations regarding their common maritime boundary since 2018.

To promote peace and good neighbourliness between Ghana and Togo, President Nana Addo Dankwa Akufo-Addo and President Faure Gnassingbe, agreed in 2018 to adopt a peaceful and coordinated joint effort, rooted in international law and standards, to serve as a guide in the delimitation process.

So far the Ghana-Togo Maritime Technical Committee has agreed on a roadmap for the negotiations on the delimitation of the common maritime boundary.

Mr Albert Kan-Dapaah, the Minister of National Security, in his closing remarks, said while the focus of the Accra Meeting had been primarily on the two nation’s common maritime boundary, it was worth highlighting that Ghana and Togo continued to cooperate on various issues, especially relating to land boundary issues.

He said efforts would, thus, be made to continue to collaborate with Togo on all land issues to get them resolved amicably.

“At this stage, I wish to recommend the establishment of a Joint Technical Committee for Land Boundary between our two countries,” Mr Kan-Dapaah said.

“The Joint Committee shall jointly resolve all land boundary issues amicably for the peaceful co-existence of the two countries.”

Mr Kan-Dapaah, who described the Accra Meeting as very fruitful, said it had accorded both parties the opportunity to further deliberate and agree on a number of issues including establishing the technical parametres with respect to the delimitation of their maritime boundary.

He said the Government and People of Ghana were optimistic and looking forward to meeting the November 2021 timeline for the signing of the Delimitation Agreement, by which time all grey areas would have been clarified.

That, he said, would pave the way for another epoch-bilateral summit between the two countries.

Mr Tengue, on his part, said the Government of Togo was committed to supporting the technical committee’s negotiations on the delimitation process.