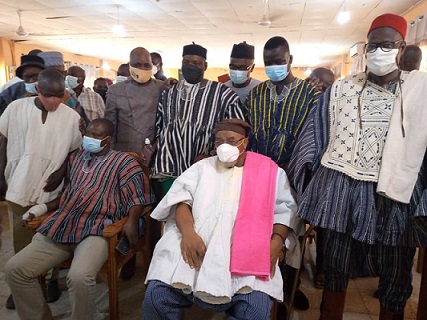 Tong-Raan Kugbilsong Nalebegtang, the Paramount Chief of the Talensi Traditional Area has beaten four contestants to retain his seat as the Upper East Regional representative at the Council of State.

The former Member of Parliament for the Talensi Constituency polled 19 out of the 30 votes to beat Pe Ditundini Adiali Thomas-More, the Paramount Chief of the Chiana Traditional Area and current President of the Upper East Regional House of Chiefs who had six votes.

Dr Akamboe Ayirebasia, a retired Public Servant managed to garner five votes while Mr Akurugu Eric Aligiyelah, a teacher and Mr Yaw Mort, a former Regional Organizer of the New Patriotic Party and a business man had no votes.
Mr William Obeng Adarkwa, the Regional Director who declared the results said all the 30 delegates had successfully cast their votes and there were no rejected ballots.

In a victory speech, Tong-Raan expressed gratitude to the delegates for the confidence reposed in him to serve the region once again and called for collective efforts to develop the area.

He said the people of the region especially leaders must recognize that the region was poor and it would take team work to progressively develop it and secure a better future for the younger generation.

“The habit of pulling one down must stop, we must see our region as one of the most deprived regions in the country and put ourselves together to fight for the growth of the region. Let us work jealously for the progress of the region so that our children will not suffer and blame us,” he appealed.

The Paramount Chief pledged to operate an open door policy and noted that although he had assisted many youth in the region to secure jobs especially in the security sector and played a key role in the commencement of the construction of the Pwalugu Multipurpose Dam, he would continue to work to ensure that the dam came to fruition.

He further gave the assurance that he would work with relevant stakeholders to bring more development projects for the improvement of livelihood of the people in the region.