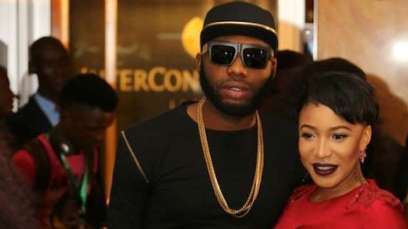 Actress Tonto Dikeh in her daily inspirational post, has written that people should be a source of strength and encouragement to people who are battling with their inner demons.

In her post on Instagram today (September 15) she wrote ?when you are around people who challenge your thoughts and who you are ,remain calm and maintain your light. You don?t have to dip out on the people you are supposed to care about because you are told you deserve better. People have ?off days?.Everyone acts and responds differently. If we dip out every time someone hurts us, or doesn?t behave the way we ideally want in our heads,well then we?d all be alone.? Swanky Jerry and Tonto Dikeh She further wrote, ?Everyone has their own problems and demons. Some will test your patience more than others but that doesn?t mean to give up on them .They need help. They need to be shown LOVE feel free to distance yourself when you have to so that you don?t get drained. Manage self -control enough to not let yourself become a victim ,but don?t forget to be a source of happiness for whoever you?re around, no matter how they act toward you. Not everyone is going to think and operate the way you do. Your morals might not match theirs ,but that does not make them a bad person, or you any better. Don?t dampen who you are due to the people you?re around. Keep shining regardless if they understand it or not ,because in the end light will always glow through darkness.?

Tonto Dikeh?s mum The newly wedded actress revealed recently that she did not know how to cook. The controversial actress, who has been experimenting in the kitchen disclosed, from all indications, that she is now being compelled to learn how to cook herself.

She took to Instagram to recall when her step mother would call her into the kitchen to come and learn how to cook but she would refuse, giving excuses like not wanting to mess up her manicure.

She then thanked her sister who came to her rescue by telling her how to go about the cooking which she eventually made.