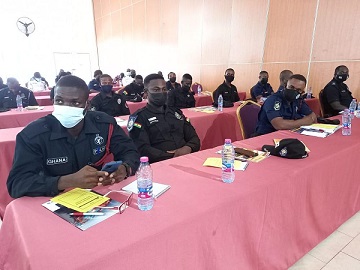 The Ghana Shippers’ Authority (GSA) says the several security barriers along the country’s transit corridors are a challenge to Ghana’s transit trade in the West African Sub-region.

Mr Fred Asiedu-Dartey, Head of Freight and Logistics at the GSA, said even though the mounting of barriers on roads was to ensure the safety of truck drivers and transit cargoes, it was also a bottleneck to smooth transit trade in the country.

He said this in Tamale when the GSA, in collaboration with the Ghana Police Service, organised a sensitization workshop for selected Police Officers in the Northern and Savannah regions.

The workshop was the third in series of activities being organised by the GSA to discuss challenges along transit corridors and devise strategies to curb such issues, as well as sensitize security service personnel on the benefits of transit trade to the country’s economic growth.

He added that “The outcome of the latest fact-finding trip undertaken from May 24 to 28, 2021 on the Tema – Hamile corridor recorded 55 Police and MTTD stops with 40 being permanent barriers and 15 temporary barriers, two Forestry Commission posts, nine Customs checkpoints, and three Immigration checkpoints as well as four Axle Load stations located at Tema motorway, Akom, a mobile axle weighbridge at Doboro, and Sawla”.

He said these barriers resulted in undue stops by drivers and alleged monetary extortion by some security officers among other illegal acts.

Mr Asiedu-Dartey indicated that these challenges needed to be curbed along the country’s transit corridors to make Ghana more competitive in the sub-region.

Deputy Commissioner of Police (DCOP) Moses Atibilla, Deputy Northern Regional Police Commander, commended the GSA for enlightening Police Officers on the benefits of transit trade to the country’s economy, and the roles expected of them to promote such activities.
He said Police in the Region were committed to removing trade barriers along Ghana’s transit corridors to enhance economic activities in the country.