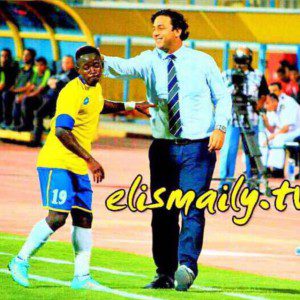 Ismaily star Torric Jebrin has revealed that he will cope at the club despite the resignation of his ‘Daddy’ Hossam Mido.

The former Egypt striker resigned as the head coach of the Ismaily club after a fall out with team captain Hosny Abd Rabbo leaving the Ghanaian midfielder lonely.

Mido who, according to Torric Jebrin was a father to him at the club, resigned after eight matches in the Egyptian Premier League a few days after the side’s 3-0 victory over Ghazel El Mahallah.

But the former Hearts of Oak midfielder says he will cope at the club without his father.

“It is a difficult situation but I will cope. Mido was not just a coach to me but a father. He provided me with all I needed to feel comfortable at Ismaily and I was happy having him as a coach.” Torric told GHANAsoccernet.com

“But that is the nature of football. Coaches do not always last at their clubs but players are always expected to live on in the absence of their coaches. So I will cope without him.”

“I have spoken to him severally after his departure and he keeps on advicing me. I will still continue to do what I have been doing for the club. I shall still be the Torric Jebrin the club knows,” he added.

The former Hearts of Oak wonder kid has been the dribbling magician of the Ismaily side winning praises from his team mates and the technical team since the commencement of the Egyptian League.