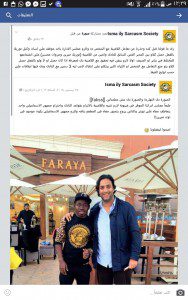 Startling Ghanaian midfielder Torric Jebrin has sparked what appears to be one of the biggest football controversies in Egypt as Zamalek fans have started mocking Ismaily for a possible transfer.

Torric, 25, joined the Ismaily side in June this year and has promised to be a great addition to the side in their quest to win the Egyptian Premier League.

The former Hearts of Oak midfielder has enjoyed the love and fantasy of the Ismaily fans since joining the side with former coach Hossam Mido providing him a fatherly love.

Torric, has described Mido as his ‘dad’ in Egyptian football for the love and support he showed him when he was the head coach of Ismaily.

Mido recently fell out with the Ismaily-based side and has taken up appointment at Zamalek as the head coach of The White Knights.

The Egyptian media quickly linked the wonderful Ghanaian midfielder to a move to The Royal Team and it has since generated controversy in the Maghribian country.

Zamalek fans have taken to social media mocking Ismaily fans with reports that Torric will be joining his ‘father’ Mido very soon.

Torric has been the anchor in midfield for the former African champions emerging the top assist with two player of the month accolades.

The controversy has just started and as to whether Ismaily will release their most productive midfielder to Zamalek is another story.