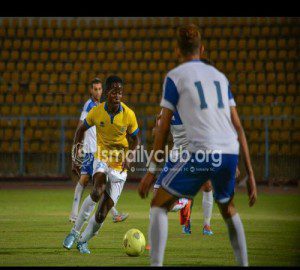 Ghana midfielder Torric Jebrin has disclosed that he is eager to take the Egyptian league by storm ahead of the kickoff of the season in October.

The former Hearts of Oak midfielder announced a three year deal with Ismaily SC in Egypt on a free transfer in July and has made his intentions of proving his worth when the Egyptian season finally zooms into action.

Torric, 24, was the star man for his side in a friendly played yesterday, assisting on two occasions to wallop Almatrya by 5-1 and the former Bucasspor signing insists he will dazzle the Egyptian league.

?I am happy that I was able to assist my team mates to score. The players respect me and have provided a very good environment for me. They have so far shown me support and the way they play with me, I wish the season is just starting,? Torric told GHANAsoccernet.com

?The season will be starting in October and I have already started feeling it. The coach and the players are happy with me and some of the fans who came to watch the game yesterday were happy as well. So I need to keep them happy when the season kicks off,? he added.

The former Hearst of Oak star had a tough time in the Turkish league compelling him to terminate his contract with Bucasspor and has vowed to relaunch his career with the Egyptian outfit.