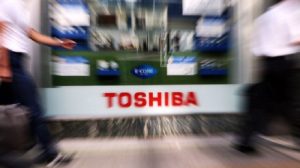 (dpa) – Toshiba president and chief executive Nobuaki Kurumatani resigned on Wednesday, the company said, a week after it received an acquisition proposal from a British equity firm.

The Japanese industrial conglomerate said its board of directors has accepted his resignation and appointed Satoshi Tsunakawa to take over the role. The changes are effective immediately, it said.

His abrupt resignation comes amid a reported conflict within the management over the buyout offer.

Shares in Toshiba surged 5.77 per cent on the day.

“Evaluation is not possible at this moment. Not a few things require careful consideration,” Osamu Nagayama, chairman of the Toshiba board, told an online news conference after the board meeting.

CVC, based in Luxembourg, has committed 161.9 billion dollars of funds, according to its website.

In February, major Japanese cosmetics maker Shiseido said it would sell its personal care business to CVC for 160 billion yen.

A bid by a non-Japanese firm would need to be approved by the Japanese government for national security reasons. An acquisition of Toshiba would be scrutinized very carefully as it also runs a nuclear power business.

Toshiba has been forced to undertake a fundamental restructuring after the 2015 accounting scandal and the bankruptcy of its US nuclear power subsidiary in 2017. It no longer produces personal computers and television sets and sold its lucrative memory-chip unit in 2018.

Toshiba conceded in 2015 that it had inflated its profits over seven years to make money-losing businesses seem profitable.

In 2017, Westinghouse Electric, which Toshiba acquired in 2006, filed for Chapter 11 bankruptcy in the United States.

Japan’s worst-ever atomic disaster at the Fukushima Daiichi Nuclear Power Station in 2011 has made the nuclear power business more costly due to growing concerns and stricter regulations at home and overseas.