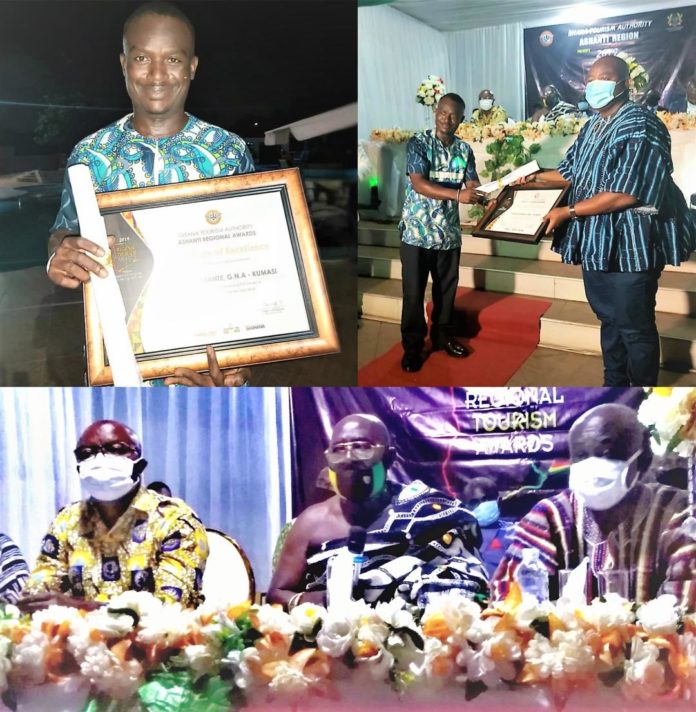 The Ghana Tourism Authority (GTA) has awarded Mr Stephen Asante, a Chief Reporter of the Ghana News Agency (GNA), with the ‘2019 Ashanti Regional Tourism Writer of the Year’ Award, at its awards’ ceremony, held at the Rattray Park, Kumasi.

“The GTA is delighted to honour you for your high commitment to tourism development and promotion over a decade.
“We recognize your passion for tourism and consistency in service delivery,” a citation presented by the Authority read.

The award-winner also received a Certificate of Excellence. It is the second time the journalist is being honoured by the Authority for his enthusiasm in creating awareness of the tourism potentials in the Region, especially in the area of heritage and eco-tourism.

In 2014, he was recognized for his immense contribution to the growth of the sector through well-researched and educative articles highlighting tourist attraction sites in the Region.

The programme also saw the Metropolitan Chief Executivr of Kumasi, Mr. Osei Assibey-Antwi, being presented with the ‘Tourism Personality of the Year’ Award, while Mr Joseph Kwasi Asuming, District Chief Executive (DCE) for Bosomtwe, also received an honorary award for his support for the sector.

The DCE was recognised for playing a significant role in efforts to protect the only natural lake in Ghana, Lake Bosomtwe, which is a UNESCO-designated biosphere reserve site and major source of revenue for the Bosomtwe District Assembly.

More than 20 individuals, corporate and civil society organizations were honoured at the awards’ceremony for their respective roles in developing the tourism sector.

They received prizes ranging from plaques, citations to certificates of honour. Otumfuo Osei Tutu II, Asantehene, was represented at the programme by his Mpaboahene, Nana Yaw Owusu, and in a speech read on the former’s behalf he congratulated the award-winners for good job done.

The Asantehene urged stakeholders in the tourism industry, including; hospitality facilities, to always strive for excellence in their endeavours.

They should embrace professionalism in order to add value to their work, he advised. Additionally, it was their duty to work within the confines of the rules and regulations relating to tourism in general.

Otumfuo Osei Tutu drew attention of stakeholders to the emerging trends in the sector due to the COVID-19 pandemic, and asked them to get their priorities right as they worked for increased income.

Mr Akwasi Agyemang, Chief Executive Officer (CEO) of the GTA, in a speech read on his behalf, said the award-winners should continue to work hard to bring growth to the tourism sector.