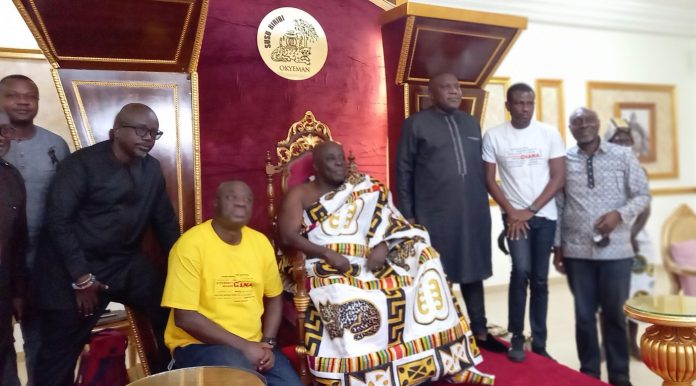 Dr Mohammed Ibrahim Awal, Minister for Tourism Arts and Culture has disclosed that plans are advanced for all roads leading to tourist sites in the county to be fixed as a step to improve tourism infrastructure as well as patronage.

He indicated that government intends to invest heavily in the tourism sector to strengthen its base to create jobs and employment for an estimated one million youth in the country and called on all stakeholders to support the industry in that direction.

The Minister made this known when he paid a courtesy call on Osagyefo Amoatia Ofori-Panin, the Okyenhene at Kyebi, and met with industry players in Koforidua as part of a day’s working tour of the Eastern Region.

Dr Awal hinted that processes had begun to identify and develop two iconic tourists sites in the Eastern Region to international standards as part of the job creation drive and tourism and expressed hope that the traditional authorities would support the ministry to realise that goal.

He observed that the covid-19 pandemic had dealt a huge blow in the tourism sector disclosing that the sector recorded a decline of over one million tourist visits in 2019 to less than 300,000 tourists in 2020 “undoubtedly this has resulted in the loss of thousands of jobs as well, aside from all others” he added.

The Minister who later in the company of Mr Seth Acheampong Eastern Regional Minister and Mr Okraku Mantey, deputy Tourism Minister visited the Boti falls and the Bunso arboretum urged the management of Boti falls to gear up towards infrastructure improvement.

On domestic tourism, he said the Ministry was putting measures in place as part of post-covid-19 plans to ensure that at least one million Ghanaians every year would have visited tourist sites across the country.

He Okyenhene on his part assured the Minister of his unflinching support to the ministry in improving tourism to create jobs for the people noting that his area abounds in fascinating sites including the Bunso arboretum and several waterfalls.

Mr Akwasi Agyemang, Chief Executive Officer, Ghana Tourism Authority(GTA), urged hoteliers and players in the industry to hook onto the bookings-com explaining that it was a digital platform that helped in increasing access and patronage of their facilities online.

He said at the last check only 150 hotel facilities had signed onto the platform adding that the bookings-com was a marketing tool where most visitors of late go to and book their hotels n advance and urged all to take advantage.

Mr Agyemang touching on the Gh55 million cedis government grant to the tourism industry was to support players to upgrade their facilities as well as to cushion them in the deficits created as a result of the covid-19 pandemic and advised hotels and all other players in the sector to apply.

He noted that most industry players in the sector complained of not benefiting from the earlier covid-19 stimulus package due to several factors such as inability to meet the requisite criteria and urged all to take advantage to fix all the gaps in their operations to meet the requirements for the funds.