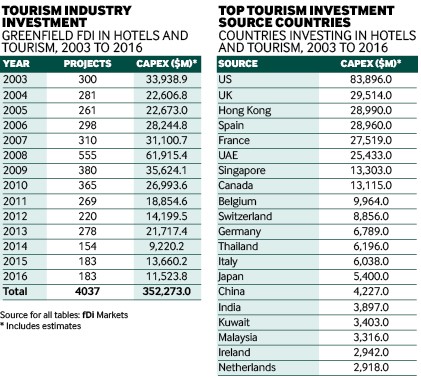 As the UN’s International Year of Sustainable Tourism for Development gets under way, Sebastian Shehadi examines the investment and visitor numbers that make tourism such an important sector to many countries.

The UN has declared 2017 the ‘International Year of Sustainable Tourism for Development’. While not exactly the snappiest of titles, the designation recognises the contribution that tourism makes to socio-economic development, as well as the growing consumer demand for environmentally low-impact tourism.

In 2015, 193 countries agreed that the sector should come under the UN’s Sustainable Development Goals initiative, and with good reason. UN World Tourism Organization (UNWTO) general-secretary Taleb Rifai says tourism facilitates “economic growth, social inclusion, cultural and environmental preservation, [and increases] our understanding, tolerance and empathy for our fellow man” – a significant contribution in an ever more globalised and politically uncertain world.
Extraordinary growth

Despite occasional shocks, international tourism has experienced remarkable growth in the past 60 years and is one of the largest and most resilient sectors.
According to the UNWTO, global tourism arrivals grew by 3.9% in 2016, marking the seventh consecutive year of above-average growth since the 2008 financial crisis, despite facing many challenges such as increased security concerns. The UN predicts that there will be similar growth in 2017, while the World Travel & Tourism Council (WTTC) expects the sector to expand by 4% a year over the next decade.

Global tourist arrivals have risen from 25 million in 1950 to an expected 1.23 billion in 2017, with 1.8 billion forecasted for 2030. Worldwide, the sector represents one in every 11 jobs and totals 7% of the world’s exports in goods and services, accounting for $1260bn in 2015, according to the UNWTO.
Greenfield investment monitor fDi Markets reports that $352bn in capital expenditure was spent on tourism between 2003 and 2016, putting the sector 10th out of 39 in terms of ‘most capital invested’. 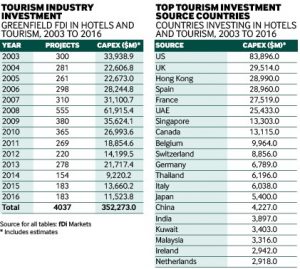 The WTTC says tourism “employs a disproportionately high percentage of women and young workers, and supports the creation of jobs beyond industrial and commercial centres, thereby encouraging well-distributed economic growth”.

“The sector also provides opportunities for entrepreneurship at a low level, and open tourism plays an important role in underpinning peaceful and [tolerant] societies, which itself is a driver of economic development,” it adds.

Encompassing eight direct business activities, tourism is a diverse sector that fuels other parts of a country’s economy, such as infrastructure and the leisure industry. Most investment in tourism relates to hotel construction, according to fDi Markets, with US and European companies such as Hilton and Accor the most prolific investors.

fDi Markets reports that, between 2003 and 2016, most tourism FDI came from western Europe or the US, with the latter dwarfing the competition. In terms of capital investment, only three of the top 10 source countries are from other regions: Hong Kong, the United Arab Emirates and Singapore.

The opposite is true of FDI destinations, however, where the only Western countries in the top 20 destinations are the UK and the US (at third and fourth place, respectively), and Germany and Canada. The remaining 16 countries are predominantly from the Middle East or Asia-Pacific, with China taking first place.

In other words, the developing markets are receiving the most FDI in tourism. According to fDi Markets, nearly 80% of the $352.2bn invested since 2003 has gone into such markets, including emerging European countries.

Yet tourist numbers have yet to catch up this investment trend. Of the 1.18 billion international arrivals in 2015, more than half (52%) went to ‘advanced markets’, according to the UNWTO. Alongside the US, five of the top 10 tourist destinations were in western Europe, and the six combined received 29.5% of tourist arrivals in 2015.

Developing markets are gradually catching up, however, thanks partly to FDI. For several years now, Asia-Pacific has been the leading region for growth in tourist arrivals. In 2016, it grew by 8% compared with 2% in Europe – the slowest growing region according to the UNWTO – and the UN predicts that between 2010 and 2030, tourist arrivals in emerging economies will grow twice as fast as those in advanced markets.

FDI is not enough

While Greenfield investment is important, there is no proven correlation between it and increased tourist arrivals. For example, fDi Markets ranks Lebanon in the top 20 destinations for FDI in tourism in terms of capital investment since 2003. However, it has mostly witnessed mild or negative growth in tourist arrivals, due for the most part to political and social instability.

And while international tourist numbers have grown continuously since 2008, greenfield FDI in tourism has almost consistently decreased since the 2008 financial crisis, and by every benchmark, according to fDi Markets. Between 2003 and 2008, average investment was $33.3m. Since then, it has fallen to $18.9m. Although tourism is resilient, at least at the consumer level, the current investment slump may have a delayed, long-term effect on tourist numbers in the years to come.

With all this in mind, the question arises: what attracts tourists and makes a tourist hub? The WTTC admits that some factors are beyond a destination’s control – such as natural beauty, regional instability and location – and to be a hub, “a well-connected location at a convenient distance to other destinations is important”.

Other factors are within a destination’s control, however. “It also takes strategic development and investment. This requires building the right infrastructure and focusing on marketing,” says the WTTC. FDI is especially important for less developed destinations, particularly in human resources and skills investment. In these contexts, collaboration between local industry and foreign investors can ensure the needs of foreign tourists are met, the WTTC adds.

Sharing economy
Regarding current trends, the WTTC says the rise of the peer-to-peer sharing economy “continues to grow and change the way people travel, not just for leisure but also for business”.

For example, companies such as Airbnb – which enables people to list or rent short-term lodgings in residential properties – have made tourism cheaper and easier, but at the cost of traditional industry and, possibly, FDI. However, these newcomers are “under great pressure at the moment as city governments are looking to implement legislation that sees more partnerships between the old and new tourist industry”, the WTTC adds.

Another trend observed by the WTTC is a boom in outbound Chinese tourists. In 2015 its data showed that China’s outbound expenditure grew by 53% to a total of $250m spent abroad. It predicts that China’s tourism sector will expand by 7% every year for the next decade.

“Despite the reports on the Chinese economy slowing down, the Chinese middle class is still growing rapidly, leaving many citizens with more spending power, which is being spent on travel,” says the WTTC.

However, fDi Markets reports that, excluding Hong Kong, Chinese FDI in tourism has shown only mild growth since 2003. In total, only $4.8bn has been invested, a sharp contrast to the US’s $83.9bn.

Courtesy :Sebastian Shehadi
This article is sourced from fDi Magazine