Scores of holiday revellers are severely injured in an accident on the Bunso Arboretum Canopy Walkway in the East Akyem District of the Eastern region. 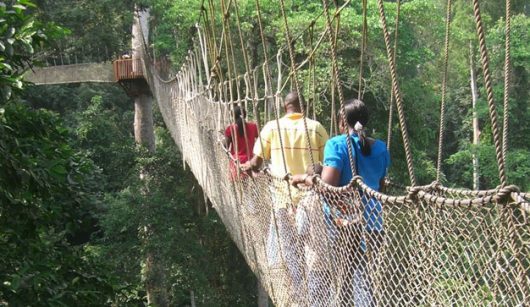 Two people are said to be in a critical condition after one of the hooks connecting the canopy walkway to a weak tree reportedly unfastened.According to Starr News? Eastern regional correspondent Kojo Ansah, a child who is among the injured has been rushed to the Koforidua Government Hospital ?for emergency care.??Some of the injured are Junior High School (JHS) graduates who just completed the Basic Education Certificate Examination (BECE) and have been rushed to the Tafo Government Hospital,? Ansah reported.Officials of the National Ambulance Service have been at the scene to attend to the injured.Bunso Arboretum Canopy Walkway was completed in May 2014 and has five bridges.Source: Ghana/starrfmonline.com