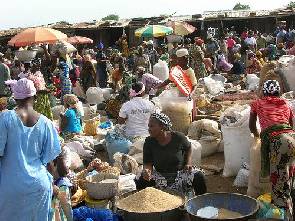 Traders at the Takoradi Central Market in the Sekondi-Takoradi Metropolis, have expressed concern about the high cost of living, and frequent hikes in petroleum products and transportation fares which was affecting their businesses.

They told the Ghana News Agency in Takoradi on Monday that hikes in prices of goods had drastically slowed down their businesses, since customers complained bitterly about the cost of goods, sometimes accused of deliberately inflating prices of goods to make the government unpopular.

However, the traders dismissed those allegations, stating that the increase transportation fares and fuel had automatically affected every item.

She also lamented about the frequent power outages which was affecting the storage of fresh fish.

She added that the unannounced power outages had destroyed her deep freezers and other household electrical appliances.

She appealed to the government, to, as a matter of urgency, resolve the power crisis before things got out of hand.

Some traders told the GNA that they went for bank loans to start their businesses, however, in view of the economic hardships they could not pay back on time thereby increasing the interest rates on the loan.

Madam Charlotte Mensah, a trader who sells salted fish, popularly called ?Kako,? said the prices of the fish had increased, adding ?I used to sell one ?kako? at GH?10.00 but now it is being sold at GH?15.00 or more?.

Madam Anita Anaman, popularly called ?Asorba? by her peers, claimed that the price of tilapia had increased arbitrarily, thereby decreasing patronage of the product.

Thomas Addai, a cobbler, who sells traditional sandals, said increase in the price of leather has affected the cost of the sandals, and had slowed down business as well, adding that he used to sell 20 pairs of sandals a day, but was currently selling less than that.

The National Petroleum Authority (NPA) recently increased the prices of petroleum products, citing increase in the dollar rate on the international market which had affected prices of crude oil.