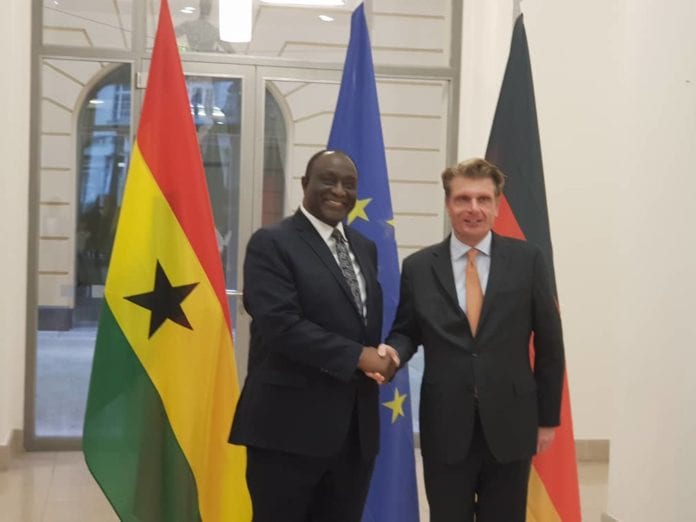 Hon. Alan Kyerematen, Minister of Trade and Industry has called on investors, especially those from Germany, to take advantage of the Ghanaian enabling environment to invest in the country as a way of deepening the commercial engagements between the two countries.

The Minister was addressing an investment forum in Berlin when he led a Ghanaian Delegation to the first Ghanaian – German Business Council meeting and Investment Summit.

It would be recalled that, Ghana and Germany signed an MOU in February 2019, to establish the Business Council as a framework to enhance Trade and Investment Cooperation.

Touting the congenial investment climate of his country, the Minister told the German business community that Ghana has a strong and resilient economy; has arguably the best credentials in terms of democratic governance; offers a safe and secured climate with a complement of infrastructure which is still being improved; as well as a good, fair, equitable and transparent judicial system.

According to the Trade and Industry Minister, the prospects are even higher for German investors coming into force of the African Continental Free Trade Agreement which provides the single largest market of a population of over 1.2 billion people with a combined GDP of three trillion dollars and a control of about 60% of the world’s arable land.

Mr. Kyerematen was accompanied by Ambassador Gina Blay (Ghana’s envoy to Germany), Mr. Yofi Grant of the GIPC, Prof. Alex Dodoo, DG of Ghana Standards Authority, Mr. Ernest Bediako Sampong, Group CEO of Ernest Chemist Ltd, Afua Asabea of GEPA, Kofi Baafi of Free Zones Authority, among other business Executives such as the CEO and founder of Ernest Chemists and Mr. Anthony Ameka of the Ghana Chamber of Pharmacy, among others.

Hon Kyerematen, further seized the opportunity to sign a Joint Declaration with the German Secretary of Economy and Energy to establish a Competency Center for Mining and Processing of Mineral Resources in Ghana.