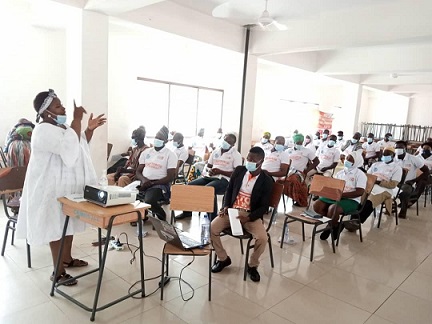 Traditional Authorities, religious and opinion leaders from selected communities in the Wa East District of the Upper West Region have been sensitized on their roles in preventing child marriage.

They have also been sensitized against gender discrimination and its consequences on the girl child and why they should promote gender equity and equality for the holistic development of their communities.

Speaking during the sensitization forum held at Loggu community in the district, Madam Charity Batuure, the Regional Director of the Department of Gender, noted that the programme was aimed at sharing information on gender issues to empower community leaders to help end child marriage and teenage pregnancies.

She explained that the project was motivated by the findings of the United Nations Population Fund (UNFPA) through the Ghana Health Service (GHS) District Health Information Management System (DHIMS), which identified Wa East as the District with the highest prevalence rate of teenage pregnancies.

She said the data particularly identified four communities, namely Loggu, Manwe, Kulkpong and Kendeu as communities with very high rates of teenage pregnancies in the district hence the decision to focus the sensitization on these communities to help prevent cases of child marriage.

Madam Batuure said the participants were taken through the National Strategic Framework on Ending Child Marriage, the Domestic Violence Act, 2007 (Act 732), some gender concepts, the gender family module and the wider social, legal and psychological implications of child marriage and why it should be abolished.

The Regional Director of the Department of Gender expressed hope that by the end of the project, they would be able to help reduce significantly issues of teenage pregnancies and child marriage in the Wa East District.

Naa Adama Salia, the Chief of Kilanjong, said the lack of speedy trial of cases was deterring people from reporting issues of child marriage and teenage pregnancies.

Naa Salia, who is also a Circuit Supervisor for the Wa East District Education Office, said relationships also prevented people from taking action on these cases for fear of victimization, emphasizing that it was important people understand that child marriage was a crime punishable by law.

“When we allow child marriage to fester, it is the girl child that will suffer and we should not allow that to happen,” Naa Salia added.

Madam Albertina Kunditeni, Welfare Officer, Wa East Education Office, said the laws on child marriage were enough but stressed the need to double up efforts on enforcement of the laws to end the canker.

The traditional, religious and opinion leader’s sensitization project on the prevention of child marriage is being sponsored by UNFPA and implemented by the Regional Department of Gender.