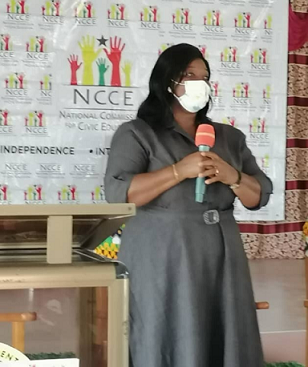 She said traditional authorities had a pivotal role in promoting and sustaining the peace and unity of the country and should take every necessary step to ensure there was peace and cohesion in their various jurisdictions.

Madam Mamattah said this in an interview with the Ghana News Agency during a community engagement at Kpetoe in the Agotim-Ziope District of the Volta region which looked at violent extremism, terrorism, and what could be done to forestall them.

The engagement was organised by the Commission in collaboration with the Ministry of National Security under the theme, ‘empowering Ghanaians to stand for national cohesion and inclusive participation.’

She urged all to uphold the principles of peace and unity at all times, conduct themselves in a manner that would ensure the safety and security of the country, and implored the youth to desist from being used as tools to cause mayhem.

The Director charged the participants to serve as ambassadors and advocates of peace in their communities and to disseminate what they learnt to their households, families, and friends.

Mr Christian Ahiawodzi, Agotime-Ziope District Director of the Commission underscored the importance of peace in accelerating the growth of communities and the country at large.

He said development could only be achieved in an atmosphere of peace and tranquility, hence conscious efforts must be made to protect and sustain the current prevailing peace of the country.

Mr Ahiawodzi urged the youth to get actively involved in the peace building process of their various communities so they would have violence-free communities to execute their dreams.

“Peace is paramount to any development agenda so the engagement is to reiterate the need to remain peaceful and united to move the fortunes of the country forward”, he said.

He asked the citizens to abide by the laws governing the country, cherish peace in all their undertakings and avoid taking the law into their hands.

Mr Ahiawodzi called on Pastors to endeavour to preach the message of peace to their congregations and be security cautious during church services.

Chief Superintendent of Police, Mr Lawrence Akpemado, Station Officer of Kpetoe District Police, advised the participants to avoid resorting to violent means to address their grievances, but rather followed the laid down processes.